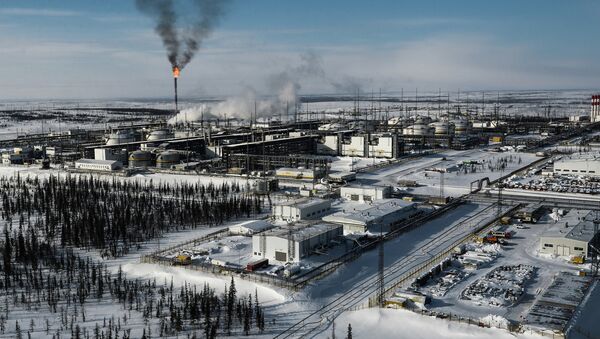 Rosneft has signed several agreements with Indian companies to increase their participation in Vankorneft, a Rosneft subsidiary that is developing the Vankorskoye oil and gas condensate deposit, the Russian company said in a statement.

MOSCOW (Sputnik) – Rosneft, Oil India, Indian Oil and Bharat Petroresources have signed a Heads of Agreement for the acquisition of up to 23.9 percent in Vankorneft. Under the document, they can sign a legally binding purchase and sales agreement.

Essar Company Hopes Russia Will Become India's Prime Oil, Gas Supplier
Also, Rosneft and ONGC Videsh Limited have signed a memorandum of understanding on cooperation in the Vankor project, under which the Indian company can increase its stake in Vankorneft to 26 percent. Earlier the companies signed the agreement on the sale of 15 percent in Vankorneft and a shareholders agreement in regard to the management of the joint venture. The closing of the sale and purchase deal is expected in the short term.

In addition, Rosneft and ONGC Videsh Limited also agreed to analyze the possibility of enhancing their joint trading potential, including the signing of long-term crude oil supply contracts.

Rosneft, Oil India, Indian Oil and Bharat Petroresources signed a memorandum of understanding on how the sides will cooperate in the Vankor project, envisaging the joint analysis of a potential partnership for the development of the Suzunskoye, Tagulskoye and Lodochnoye fields.

“These documents literally open a new page in Russian-Indian energy cooperation in keeping with the agreements reached at the top level between Russian President Vladimir Putin and Indian Prime Minister Narendra Modi. The agreed format for cooperation, reached at the corporate level, is aimed at creating a vertically integrated system that will allow Indian partners to participate in Rosneft’s upstream projects while giving Rosneft access to the growing Indian market. These agreements represent a transition from energy dependency to energy partnership of both countries,” said Rosneft CEO Igor Sechin.

Vankorneft, a Rosneft subsidiary, was established in 2004 for the purpose of developing the Vankorskoye oil and gas condensate field, the largest field discovered and put into operation in Russia in the past 25 years. The field is situated in the north of East Siberia – in the Turukhansk District of the Krasnoyarsk Territory. In 2015, Vankorneft produced 22 million metric tons of oil and 8.7 billion cubic meters of gas.