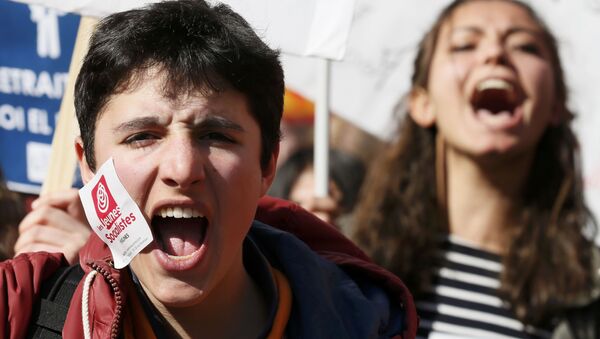 Dozens of universities and thousands of schools in France were closed or barricaded Thursday as students staged a countrywide mass protest against reforms to French labor conditions, as well as emergency powers wielded by the authorities after the Paris terror attacks.

By 0900 CET Thursday, 45 high schools in Paris alone were either closed or barricaded and the authorities at the universities of Paris 1 and Bordeaux took the decision to close some of their sites, including Tolbiac, Sorbonne, Saint-Hippolyte pour Paris 1, La Victoire pour Bordeaux.

There were hundreds of similar closures reported in Seine-Saint-Denis, in Caen, Chambéry, Bordeaux, Grenoble, Lyon, Nantes and La Rochelle as tens of thousands of students demonstrated against the French Government in moves reminiscent of the Paris student riots of 1968.

French President Francois Hollande is under fire for pressing for reforms to the highly codified French labor laws — known as the Code du Travail — in order to give employers more flexibility. The labor reforms were largely directed at making companies take on more workers on permanent contracts, rather than temporary ones, to bring down the unemployment rate from ten percent. The proposals would give employers more scope to lay-off workers and cut costs and allow some employees to work far longer than the current 35-hour week.

It was following the 1968 riots that the Code du Travail was changed to bring the maximum working week was reduced to 44 hours. It has since been reduced, over time, to 35, which the unions want to maintain, but which Hollande believes is holding back productivity because of the lack of flexibility it leaves employers.

Other reforms included a cap on severance pay for workers dismissed by a company. The current uncertain cost of laying-off workers mean that companies are risk-averse to doing so, leaving them less flexible and — in some cases — less productive. The government has now relented on that point, making the proposed cap non-binding.

The students are also protesting at the extension of emergency powers brought in following the November 13 terror attacks in Paris that left 130 dead and hundreds injured. They say that powers to prevent meetings go against the principles of "Liberté, égalité", fraternité (liberty, equality, fraternity)" and that Muslims students are being discriminated against in the use of sweeping powers of stop and search.