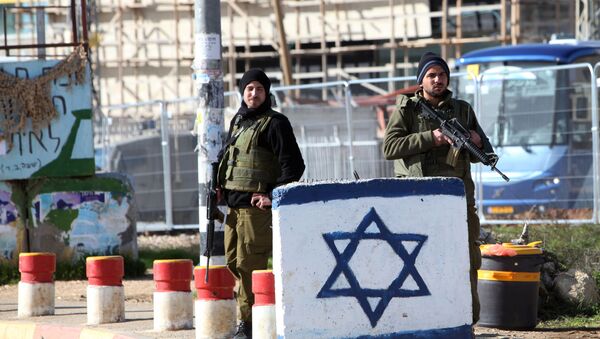 © AP Photo / Mahmoud Illean
Subscribe
The European Union slammed Israel’s move to grab 579 acres of land in the West Bank, stressing that it reflects poorly upon the country’s stated intention to contribute to a settlement to the Jewish State’s conflict with Palestine.

Gruesome Allegations: Israeli Forces Routinely Shoot Up Palestinian Corpses
Following in the footsteps of the UN and the US, on Thursday, the EU condemned Israel for occupying lands near Jericho in the West Bank and declaring them to be a part of its territory.

In a rare occasion of voicing direct criticism of an Israeli policy, the bloc’s foreign policy service issued a statement, saying that Israelis “undermine” the future of a two state solution, under which the independent state of Palestine would exist alongside Israel. It reiterated similar comments by France and Germany made earlier this week.

"Any decision that could enable further settlement expansion [in the West Bank], which is illegal under international law and an obstacle to peace, will only drive the parties to the conflict even further apart," the statement reads.

Palestinians Sue US Tycoons for $34.5Bln over Jewish West Bank Settlements
The EU also underscored in its address that it would “firmly oppose” any steps taken by Israel to legitimize annexations made during 1967 war, including “demolitions and confiscations, evictions, forced transfers or restrictions on movement and access."

The seized territories indicate the biggest land grab by Israel in recent years, according to organization Israel's Peace Now that stands for the recognition of an independent Palestine.

“[Ban] stressed the need for both sides to restore a political horizon toward a peaceful two-state solution,” a UN statement read.

US Needs Israel to Extend Power in Middle East, and Is Willing to Pay Big
Israel said settlement blocs will be in place in the West Bank regardless of peace agreement conditions. Palestinians are concerned that such a stance threatens the viability of their country.

The two-state solution dates back to November 29, 1947, when the UN General Assembly recommended in Resolution 181 the creation of independent Arab and Jewish states.

000000
Popular comments
Not new land grab. Continuous land grad. First though they need to murder the lawful inhabitants. Zionist Israel, Americas best friend. Nice.
Mitach2002
18 March 2016, 01:21 GMT
000000
As long as the EU and United States continues it's military and economic support for the fascist regime in Tel Aviv they will not change their land grabs and oppression of the Palestinian peoples. The principle devil in this long and protracted affair is the United States as usual, who supports the fascist state no matter what atrocities or violations of international law, the UN Charter and resolutions they commit. Where ever there is war, suffering, human rights violations, mass murder and crimes against humanity you will find the USA either directly supporting or behind the scenes supporting such illegal activity. And to add insult to injury the United States refers to Israel as a democracy.
hopscotch64
18 March 2016, 02:30 GMT
000000
Newsfeed
0
New firstOld first
loader
LIVE
Заголовок открываемого материала
Access to the chat has been blocked for violating the rules . You will be able to participate again through:∞. If you do not agree with the blocking, please use the feedback form
The discussion is closed. You can participate in the discussion within 24 hours after the publication of the article.
To participate in the discussion
log in or register
loader
Chats
Заголовок открываемого материала
Worldwide
InternationalEnglishEnglishMundoEspañolSpanish
Europe
DeutschlandDeutschGermanFranceFrançaisFrenchΕλλάδαΕλληνικάGreekItaliaItalianoItalianČeská republikaČeštinaCzechPolskaPolskiPolishСрбиjаСрпскиSerbianLatvijaLatviešuLatvianLietuvaLietuviųLithuanianMoldovaMoldoveneascăMoldavianБеларусьБеларускiBelarusian
Transcaucasia
ԱրմենիաՀայերենArmenianАҧсныАҧсышәалаAbkhazХуссар ИрыстонИронауОssetianსაქართველოქართულიGeorgianAzərbaycanАzərbaycancaAzerbaijani
Middle East
Sputnik عربيArabicArabicTürkiyeTürkçeTurkishSputnik ایرانPersianPersianSputnik افغانستانDariDari
Central Asia
ҚазақстанҚазақ тіліKazakhКыргызстанКыргызчаKyrgyzOʻzbekistonЎзбекчаUzbekТоҷикистонТоҷикӣTajik
East & Southeast Asia
Việt NamTiếng ViệtVietnamese日本日本語Japanese俄罗斯卫星通讯社中文（简体）Chinese (simplified)俄罗斯卫星通讯社中文（繁体）Chinese (traditional)
South America
BrasilPortuguêsPortuguese
NewsfeedBreaking
10:47 GMT'Cringe and Embarrassment': Australian Defence Minister Mocked for Not Knowing How to Do Elbow Bump
10:45 GMTApple, Google's Actions Considered Interference in Russia's Affairs, Senior Lawmaker Says
10:42 GMT'I Can't Speak to Validity': Pentagon Spokesman Elusive Over Milley's Alleged Secret Calls to China
10:41 GMTTaliban Bans Women From Entering Ministry of Women Affairs, Employee Says
10:33 GMTCapitol Fence Being Set Up to Fortify Area Ahead of 18 September Rally
10:30 GMTUK Defence Sec. Fires Back at China's AUKUS Accusations of 'Cold War Mentality'
09:55 GMTAUKUS Not Intended to Be Adversarial to Other Countries, UK PM Johnson Says
09:19 GMTRed Bull Boss Slams Lewis Hamilton and Mercedes for Faking His Injuries After Italian GP Crash
09:10 GMTAs Toll of South Africa Unrest Exceeds BLM Riots' Damage, Activist Says Instigators Will Walk Free
09:07 GMTPolice in Spain Evacuate Parts of Downtown Oviedo Over Bomb Threat
08:48 GMTWoman Who Threatened to Kill VP Kamala Harris Because She is 'Not Actually Black' Pleads Guilty
08:34 GMTNorth Korea Touts Its Railway-Borne Missile System to Deal 'Harsh Blow to Threat-Posing Forces'
08:11 GMTChina Accuses US, UK, and Australia of Intensifying Arms Race and Undermining Regional Peace
07:55 GMT'Stab in the Back': Ex-French Official Blasts New Trilateral Defence Deal Between US, UK & Australia
07:38 GMTTaliban Seeks to Build Good Relations With World Through Diplomacy, Spokesman Says
07:34 GMTPalestinians Welcome Egypt's Mediation Between Israel & Palestinians But Will It Yield Results?
07:24 GMTFourth or Fifth COVID-19 Wave 'Likely', Danish Strategists Warn
07:00 GMTLive Updates: CSTO to Take Steps to Protect Southern Borders as Situation in Afghanistan Worsens
06:46 GMTFrench FM 'Angry' With Australia's Decision to Terminate Submarine Contract, Expects Explanations
06:37 GMTPutin Says He'll Self-Isolate for Several Days as 'Several Dozen' Around Him Have Contracted COVID