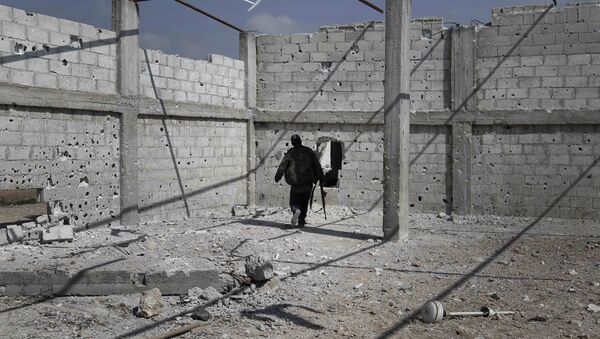 © AFP 2021 / ABDULMONAM EASSA
Subscribe
The total number of Syrian armed groups that have joined the ceasefire regime has reached 43.

Lavrov, Kerry Set to Discuss Syria Ceasefire, Humanitarian Issues in Moscow
MOSCOW (Sputnik) – The total number of Syrian armed groups that have joined the ceasefire regime has reached 43, the Russian center for Syrian reconciliation said in a daily bulletin published on the Defense Ministry's website on Thursday.

"An application form to join the cessation of hostilities over the past 24 hours has been received from a commander of an armed group, operating in the Homs province. Thus, the total number of armed units joining the reconciliation process has reached 43," the bulletin read.

A US-Russia-brokered ceasefire came into force on February 27 across Syria. It was supported by the Syrian government and dozens of opposition groups on the ground. Daesh and al-Nusra Front (outlawed in Russia) are not part of the deal.

However, a total of nine violations of the ceasefire regime in Syria have been registered in three provinces in the last 24 hours.

"Nine violations have been registered in the past 24 hours, including three each in Aleppo, Damascus and Idlib," the bulletin said.