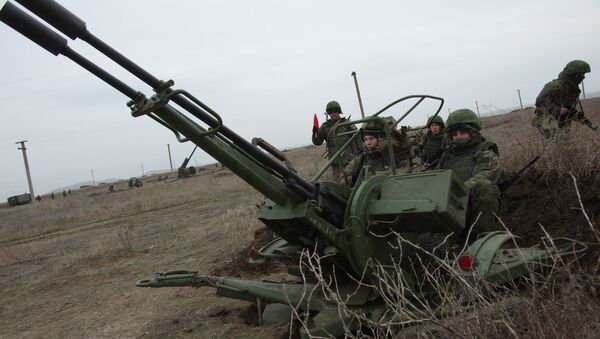 Russia has supplied Iraqi Kurds with five ZU-23-2 twin-barreled anti-aircraft autocannons and 20,000 rounds of ammunition for them, the attache of the Russian Consulate General in Iraq's Erbil said Wednesday.

MOSCOW (Sputnik) — The shipment was delivered on March 14 and it is aimed to arm Kurdish Peshmerga forces, Artyom Grigoryan told RIA Novosti.

"The weaponry was transferred in the presence of the Russian ambassador and consul general as well as the Peshmerga deputy chief of general staff," Grigoryan added.

Russia is hoping that arms deliveries to Iraqi Kurds will help Peshmerga forces as well as Iraqi army to succeed in the fight against Islamic State, also known Daesh, terrorists, according to the attache of the Russian Consulate General in Iraq's Erbil.

"After the delivery of weapons shipment on March 14, the Russian ambassador said it was not a single delivery," Artyom Grigoryan told RIA Novosti.

"The ambassador stressed that Russia is hoping that these weapons will help the Peshmerga and the Iraqi Armed forces to defeat Islamic State terrorists," Grigoryan said, adding that the arms deliveries were coordinated with Iraqi authorities.