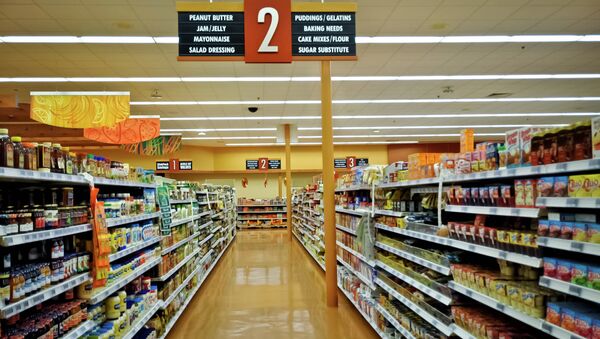 © Flickr / I-5 Design & Manufacture
Subscribe
The Grocery Manufacturers Association (GMA), the world’s largest trade association for food, beverages and consumer products, has been found guilty of hiding the identities of the donor corporations that poured millions of dollars into the group to defeat a 2013 GMO food-labeling initiative in the state of Washington.

Allowing GMO Fish in US Market Victory for Corporations - Advocacy Group
The so-called Initiative 522 would have required the labeling of genetically modified (GMOs) foods, seeds and seed products in the state of Washington. The initiative was defeated, with the GMA sponsoring a "No on 522" campaign, according to EcoWatch.

With funding reaching $22 million, the GMA "intentionally took steps to create and then hide the true source of the funds… from the voting public of Washington State," Anne Hirsch, Thurston County Superior Court Judge, wrote in a pretrial ruling.

According to Washington Attorney General Bob Ferguson, GMA raised some $14 million from its members in solicitations for a special "Defense of Brands" fund, above and beyond regular member dues.

The top contributor to the fund was PepsiCo, contributing $2.696 million.

US Congress 'Not Interested' in Labeling Genetically Altered Foods
The GMA used $11 million of the $14 million donated by member corporations in 2013 to fight Initiative 522, noted a release from the Attorney General's office. In an effort to shield individual companies from required disclosure, the money was listed as coming from GMA, not the actual donors. Internal documents from GMA indicate that this concealment was done with the full knowledge that they were breaking the law.

GMO labeling laws remain in hot dispute, with well-funded, corporate-based campaigns going up against environmental groups and small organic farm cooperatives in attempts to get state policymakers to legislate favorably.