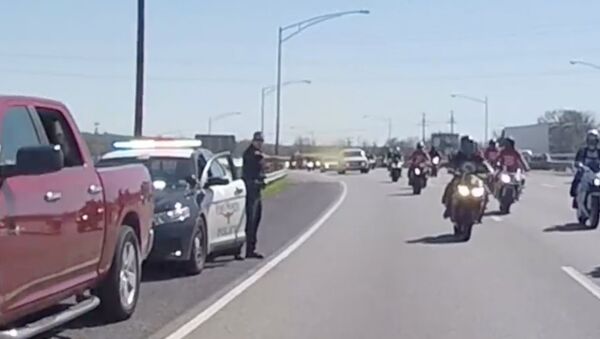 A police officer from Fort Worth, Texas, is under investigation and has been placed on administrative leave after a video of him pepper spraying a group of motorcyclists on a highway on Sunday afternoon went viral.

Officer W. Figueroa was caught on a helmet camera after he pulled over a pickup truck that was acting as one of the group's "safety vehicles.” As the bikers began to pass the officer, who was pulled over on the shoulder behind the pickup, he exited his vehicle and sprayed the orange-colored mist through the crowd.

The police department claimed that they had received several complaints about the approximately 200 motorcyclists driving recklessly and weaving in and out of traffic around the time of the incident. They also stated that Figueroa documented his use of pepper spray, but did not provide an explanation as to why it was deployed.

"His intent was to send somebody down, if not to cause a major accident with that spray," Jack Kinney, the man who recorded the video, told the station. "If you're worried about safety, why would you pepper spray a large group of bikers like that?"

The bikers state that there is no justification for spraying a blinding weapon at someone operating a motorcycle, and assert that someone could have easily been killed.

An ambulance was called to the scene to treat those who were sprayed, and one person was brought to an area hospital. There were no serious injuries.

Three of the people in the truck were cited by the officer: the driver, who reportedly did not have a license, and two people who had been riding illegally in the bed of the pickup truck.