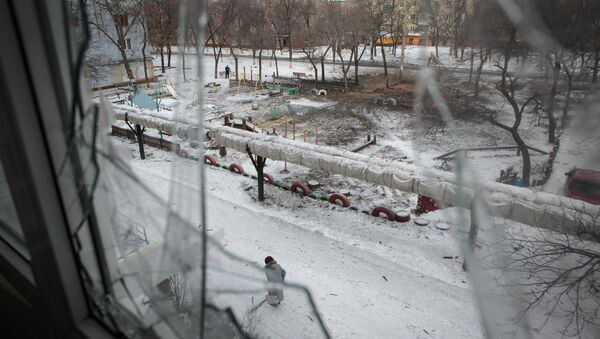 © Sputnik / Nikolay Hiznyak
/
Go to the photo bank
Subscribe
In Donetsk region an international group of journalists got caught in the crossfire, the Donetsk News Agency reported Monday.

DONETSK/ZAITSEVO, (Sputnik) – Journalists from the eastern Ukrainian self-proclaimed Donetsk People’s Republic, Russia, and China have come under gunfire near the city of Horlovka, the Donetsk News Agency reported Monday.

“Journalists from the DPR, Russia, and China came under Ukrainian Security Forces’s gunfire outside Horlovka,” the agency reported.

According to a RIA Novosti correspondent reporting from the area, a group of Russian journalists may be in the area of Zaitsevo where battling is currently underway.

Kiev launched a military operation against independence militias in Ukraine’s eastern Donbas region in April 2014. The confrontation has claimed over