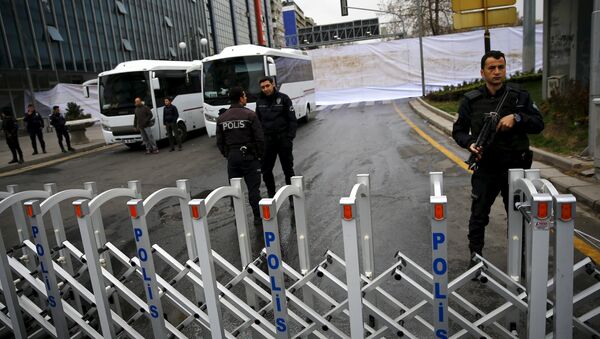 At least 11 people have been detained in Turkey in connection with a recent terrorist attack in the capital city of Ankara, Turkish Prime Minister Ahmet Davutoglu said Monday.

Four People Arrested in Turkey Over Links to Ankara Blast
ANKARA (Sputnik) – A car bomb exploded late on Sunday at a bus stop in central Ankara, leaving at least 37 dead and over 120 injured.

"As part of the investigation into the terrorist attack, 11 individuals have been detained. Thirty-five bodies of the deceased have been returned to the relatives. The DNA-study of the two remaining bodies is ongoing. But there is complete certainty that one of them belongs to the suicide bomber, and the second, perhaps, to his accomplice," Davutoglu told reporters.

There are serious reasons to believe that Turkish Kurdistan Workers' Party (PKK) is behind the deadly blast, he added.