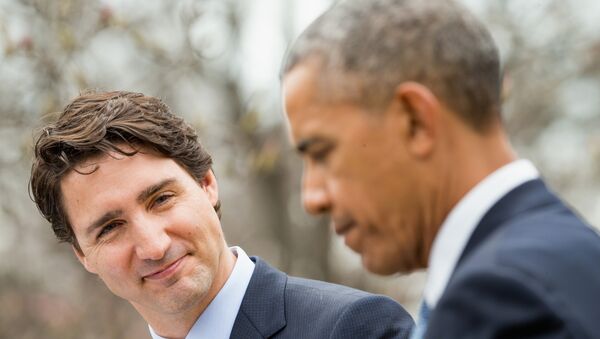 The risk of Canadian citizens ending up stuck on American security lists has just increased for those who seek to cross the border from Canada into the United States, as President Barack Obama and Prime Minister Justin Trudeau have agreed to share personal biographic information on citizens.

Obama to Hold First Bilateral Meeting With Canadian Prime Minister Trudeau
During Trudeau’s visit to Washington, DC last week, the duo worked out a national security deal wherein both countries will share information on their citizens who wish to travel across the border. The deal was quietly announced by President Obama on Thursday.

Currently, the Canada Border Service Agency provides the United States with information on third-country citizens as well as Canadians who are travelling by land across the border, but in most cases the information provided only includes the person’s name, birth date, and port of entry.

Canada’s former privacy commissioner, Jennifer Stoddart, has opposed Ottawa’s sharing of information with Washington, noting the Maher Arar case, in which an innocent Canadian citizen ended up tortured due to faulty information, as well as three similar cases involving the torture of Muslim Canadians, the Star reported.

World
Trudeau: ‘Americans Need to Pay More Attention to World,’ Americans: ‘Who?’
Current privacy commissioner Daniel Therrien announced on Friday that he will not be commenting on the new deal until he learns the specifics of what the governments are proposing.

The battle over the Canadian border continues to wage on, however, as Canada wants to see a “thin border” to allow for easy passage of travellers and goods, while the US wants to have a “thick border” to increase the difficulty for terrorists attempting to enter through the country’s northern border.

“For those Canadians still willing to travel to the US, the result promises to be the worst of both worlds — a greater chance of being mistakenly added to one of those impossible-to-escape American security lists, and a still difficult border,” Thomas Walkom wrote for the Star.