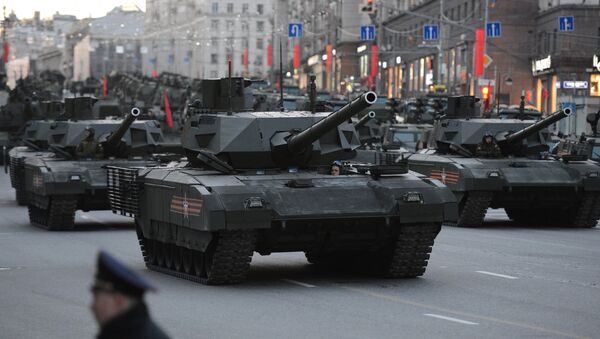 Russia's state-of-the-art T-14 tank, part of the Armata family of armored combat vehicles, is already being mass produced, according to the US magazine The National Interest.

According to Majumdar, the news will certainly come as a surprise for many Western analysts who "believed that the Armata family was still in its developmental stages" after its new models took part in the 2015 Victory Day parade in Moscow.

He referred to Sergey Chemezov, head of the Russian state corporation Rostec, who confirmed in an interview with the Wall Street Journal that the T-14 is already being mass produced.

"You can't quit when you're halfway there. Everything that has been started will be finished, and money will be allocated to it," Chemezov said, adding that as for the T-14, "it's already in serial production."

As far as the T-14 is concerned, it is "a source of major concern for Western armies," including the German Armed Forces, according to Majumdar.

"As a direct response to the development of the T-14, Germany recently launched an effort to upgun the Leopard 2 with a new 130mm cannon and is developing plans to launch a new main battle tank called the Main Ground Combat System (MGCS)," he said.

Meet the Terminator 2: Russia's BMPT-2 Combat Vehicle Dazzles at Army-2015
The tank's interior features a capsule that keeps the crew isolated from ammunition and fuel, which could increase the chances for the crew's survival if the tank is hit.

A digital control system directs the tank's movement, tracks targets and activates its defense systems, freeing the crew from routine tasks so they can focus on key combat functions. Currently, the tank sports the standard 125-mm cannon, but, designers say, it could easily outfitted with a much more powerful 152-mm cannon in the future.