The Dutch Are to Oppose EU-Ukraine Association Treaty in Referendum 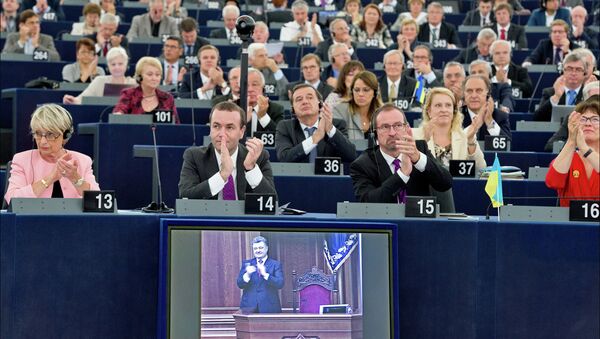 © Flickr / European Parliament
Subscribe
International
India
Africa
The majority of the Dutch people do not favor possible EU-Ukraine agreement ahead of April's referendum on the issue in the Netherlands, according to a new poll commissioned by the Dutch Volkskrant newspaper.

MOSCOW (Sputnik) — Over 57 percent of Dutch citizens oppose Ukraine's association agreement with the European Union ahead of April's referendum on the issue in the Netherlands, according to a new poll commissioned by the Dutch Volkskrant newspaper.

The Netherlands is the only EU country that has not yet ratified the Ukraine-EU association deal. The Dutch parliament has backed the agreement, but opponents managed to collect signatures necessary for the referendum to take place. The vote is scheduled for April 6.

Dutch Vote on EU-Ukraine Association Deal Is 'Headache' for Brussels
According to the poll, those respondents who oppose the deal believe that the agreement is the first stage of Ukraine's admission to the European Union, which they do not favor.

Under the Dutch law, if the people vote against the EU-Ukraine association agreement in the upcoming referendum, the government will have to review its position on the deal.

According to the DutchNews.nl news portal, if the referendum turnout does not exceed 30 percent, the government will not take its results into account.

The EU-Ukraine Association Agreement, establishing a political and economic association between Kiev and Brussels, was signed in 2014.