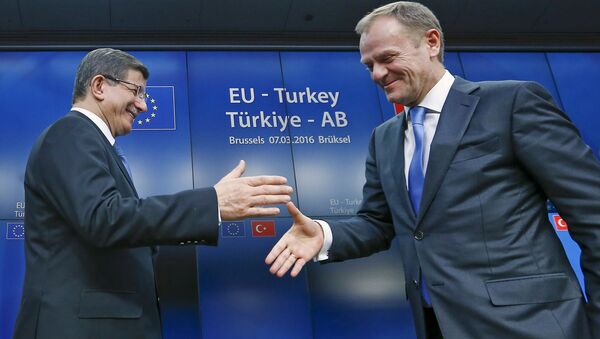 © REUTERS / Yves Herman
Subscribe
Last week, Turkey and the EU hammered out a draft agreement to tackle the Middle Eastern migrant crisis. With European opposition forces and analysts describing the deal as 'blackmail' by Ankara, it turns out much of Turkey's opposition isn't too thrilled about the deal either.

Last Monday, the EU-Turkey summit resulted in the outline of an agreement aimed at stemming the flow of illegal immigrants from the Middle East to the EU via Turkey. The deal envisions €3 billion in EU assistance (with Ankara now demanding that this be upped €6 billion), faster implementation of a visa-free regime with the bloc, and the acceleration of talks on Turkey's prospects for joining the EU. In exchange, Ankara has pledged to take back all undocumented migrants entering the bloc through Turkey, swapping them on a one-for-one basis for legal Syrian refugees.

EU-Turkey Deal Breaches Geneva Convention - European Lawmakers
The common principles agreed upon last week will be elaborated upon at the next summit, scheduled for March 17.

The draft agreement has been severely criticized by a wide variety of European commentators and lawmakers, who have broadly suggested that it is a case of Ankara 'blackmailing' Europe.

It also happens that, for a number of reasons, Turkish opposition parties of all stripes aren't so happy about the tentative deal either.

Speaking to Radio Sputnik Turkey, Ozkan Yalim, an MP from the Republican People's Party (the Turkish parliament's largest opposition party), suggested that the proposed agreement is one-sided in the EU's favor.

"On the whole, the summit can be called an operation by the EU to return refugees who have spread across Europe to Turkey," the politician noted. "Those fragmentary 'concessions' which the EU agreed to in the negotiations clearly demonstrate this. At a time when Turkey is experiencing a major unemployment crisis…spending on refugees on Turkish territory continues to grow. Figures for 2015 showed this figure to amount to $10.5 billion. Even if we assume that this figure will not increase greatly in 2016, it is still a very heavy burden for the country's budget."

Brussels Negotiating With Turkey Proves EU is 'Morally Bankrupt'
"Meanwhile," Yalim added, "the financial aid figure proposed by the EU is simply ludicrous. We all understand perfectly well that the real burden on the Turkish economy for implementing the agreement on the return of refugees would be many times higher."

"Unfortunately, while the [ruling] Justice and Development Party (AKP) proudly talks about the prospects to abolish Schengen visas for Turkish citizens, Turkey itself is turning, at an alarming rate, into a reservation for refugees; this process is clearly observable; the most recent example is the beginning of the patrol of the Aegean Sea by NATO ships…European countries, having approached the protection of their borders in a professional manner, have 'appeased' Turkey with promises to provide various benefits and a certain amount of money."

Ultimately, Yalim noted, Ankara's existing policy will only do harm to Turkey and the Turkish people. "Given such a huge uncontrolled influx of migrants, it will be almost impossible to ensure security. And this, in turn, will lead to an increased threat of terrorism in Turkey. The AKP government, the president and the prime minister must urgently review their policy on migration, before it's too late."

Elements of the country's radical nationalists aren't too happy with the deal either. In a separate interview for Radio Sputnik Turkey, Zuhal Topcu, the deputy chairman of the Nationalist Movement Party, suggested that there are reasons to doubt whether the Brussels bureaucracy is even able to fulfill its promises.

European Lawmakers Slam EU-Turkey Deal as UN Clashes With Brussels Chiefs
"It's important to pay attention to how the promises made by the two sides in the course of the summit are reflected in the work of the European Parliament, because the objection of even one state will affect the final decision rendered by the body. We consider that all the promises made [last Monday] are of no value until a final decision is made. We adhere to this position based on the experience of cooperation between Turkey and the EU which exists, and the rhetoric European countries have used in relation to Turkey for a long time," the politician noted.

Echoing Yalim's sentiment on the financial and other strains refugees have caused, Topcu suggested that while the country is obliged to "fulfill its moral obligation to providing refuge to these people, on the other hand, this duty should not and cannot interfere with the normal functioning of the state."

Ultimately, the politician suggested, "if the situation continues to develop along the current scenario, the return of refugees to Turkey could lead to an uncontrollable social explosion in the country. This threat exists, it is very real, and so the government should act extremely cautiously on this issue."

Finally, in a third interview for Radio Sputnik Turkey, Hisyar Ozsoy, the deputy chairman of the Pro-Kurdish Peoples' Democratic Party, suggested that President Erdogan and the AKP were themselves responsible for the crisis.

"Yes, Turkey is now going through the second wave of a migrant crisis, but this [situation] is directly linked to the government's Syrian policy. In reality, Turkish authorities, through their actions, have deliberately driven the situation to its current state," the politician said.

What is Geopolitical Agenda for Turkey-EU Negotiations?
Ozsoy also believes that Europe is not in a condition to help Turkey resolve its crisis. "The Schengen area faces serious pressures from the migrants. Opinions have been expressed that the EU has already begun the process of collapse – that's how serious the threat represented by uncontrolled migration flows is."

Unfortunately, the politician noted, the Turkish government, "which understands this perfectly," nonetheless continues to play the refugee problem like a card in a game of diplomatic poker.

Moreover, "the EU's strategy on this issue is not so different from that of the Turkish leadership. Europe understands perfectly well that Ankara is playing a game, using illegal immigrants as an instrument of coercion for the sake of its own interests, but at the same time, turns a blind eye to this fact, comforting themselves with the thought that they have 'no other choice' in seeking to rid themselves of the burden of this problem."

"In this way, the issue is being discussed like an open auction, with human lives at stake. From this point of view, the behavior of both the EU and Turkey looks criminally inhumane."

Ultimately, Ozsoy warned, the situation in southeastern Turkey, specifically Ankara's brutal crackdown of the Kurds, is itself turning into a "very worrying political situation, which with the coming of spring could turn into a full-scale war and spread from the east to the west of the country…In such a situation, millions of refugees from Turkey could again rush for Europe. However, Brussels does not take this danger into consideration, looking at the issue in a very narrow way, taking short-term decisions in the hope of returning to stability. But such policy, in the long run, may backfire against Europe."

000000
Popular comments
No one is qualified in the EU, they play games and make bad choices in a rush to solve the imediate problem, but the problem will only grow, because these are band aid solutions that will affect millions, So no,... we must have a say and oppose this shit deal
margaridaoulman
13 March 2016, 21:53 GMT1
000000
First create crisis (2008) and impoverish nation to turn them into economic slaves living off your credit - then be angry at them as they get back at you with opening doors to migrants you thought will be cheap labour for your economy cos (here is the kicker!) your demography is in the gutter!!! Well done Germany! Well Done! and all this was forseeable! Oh and now Turkey will shaft the EU for easy money... Coming not only from Germany but from whole EU independenttrader.org/immigrants-flooding-europe.html
The one Who knows
13 March 2016, 22:07 GMT1
000000
Newsfeed
0
New firstOld first
loader
LIVE
Заголовок открываемого материала
Access to the chat has been blocked for violating the rules . You will be able to participate again through:∞. If you do not agree with the blocking, please use the feedback form
The discussion is closed. You can participate in the discussion within 24 hours after the publication of the article.
To participate in the discussion
log in or register
loader
Chats
Заголовок открываемого материала
Worldwide
InternationalEnglishEnglishMundoEspañolSpanish
Europe
DeutschlandDeutschGermanFranceFrançaisFrenchΕλλάδαΕλληνικάGreekItaliaItalianoItalianČeská republikaČeštinaCzechPolskaPolskiPolishСрбиjаСрпскиSerbianLatvijaLatviešuLatvianLietuvaLietuviųLithuanianMoldovaMoldoveneascăMoldavianБеларусьБеларускiBelarusian
Transcaucasia
ԱրմենիաՀայերենArmenianАҧсныАҧсышәалаAbkhazХуссар ИрыстонИронауОssetianსაქართველოქართულიGeorgianAzərbaycanАzərbaycancaAzerbaijani
Middle East
Sputnik عربيArabicArabicTürkiyeTürkçeTurkishSputnik ایرانPersianPersianSputnik افغانستانDariDari
Central Asia
ҚазақстанҚазақ тіліKazakhКыргызстанКыргызчаKyrgyzOʻzbekistonЎзбекчаUzbekТоҷикистонТоҷикӣTajik
East & Southeast Asia
Việt NamTiếng ViệtVietnamese日本日本語Japanese中国中文Chinese
South America
BrasilPortuguêsPortuguese
NewsfeedBreaking
03:13 GMTSpace for Business: Bezos' Blue Origin Unveils Plan to Launch Commercial Space Station
03:13 GMTZinedine Zidane Not Interested in Manchester United Job, Reports
00:55 GMTIsrael’s Strike Plans for Iran Could Take More Than a Year to be Fully Ready, Paper Claims
00:30 GMTJamaican Pastor Accused of Human Sacrifices Dies in Car Crash En Route to Court
00:19 GMTEverything You Need to Know Before the Astros and Braves Face Off in the World Series
YesterdayUS Pauses Delivery of $700 Million in Emergency Economic Aid to Sudan
Yesterday‘News Black Hole’: A Year of War Shows Why UN Needs to Monitor Human Rights in Western Sahara
YesterdayUS, UK Condemn Military Coup in Sudan, Vow to Back Democratic Civilian Government
YesterdayInternal Documents Show Facebook Knew it Was Used to Incite Violence in Ethiopia
Yesterday'Wild $T1mes!': Musk Rejoices as Tesla's Value Surpasses $1 Trln Following Hertz's 100,000-Car Order
YesterdayRussian Sailors Saved Panama-Flagged Ship From Pirates in Gulf of Guinea- Defense Ministry
YesterdaySlump in UK COVID-19 Cases Undermines Calls for ‘Plan B’ Lockdown - Epidemiologist
YesterdayMultiple Injuries Reported in Idaho Mall Shooting, One Person in Custody - Police Dept.
YesterdayFacebook, Instagram Delete Video of Brazilian President Linking COVID-19 Vaccines to AIDS
YesterdayEuropean Regulator Approves Booster Dose of Moderna Vaccine
YesterdayUS Very Supportive of EU's Engagement in Iran Nuclear Deal - State Dept.
YesterdayUpdated US Hate Crime Data for 2020 Shows Highest Incident Levels Since 2001 - FBI
YesterdayChinese FM Wang Yi to Meet Afghan Taliban Leaders in Qatar for First High-Level Talks
YesterdayJFK's Nephews Slam Biden Administration After Postponing Assasinaton Records
YesterdayUS Has No Issue With Russia-China Military Drills in Indo-Pacific Region - Pentagon