At Least 27 People Killed After Major Explosion in Ankara 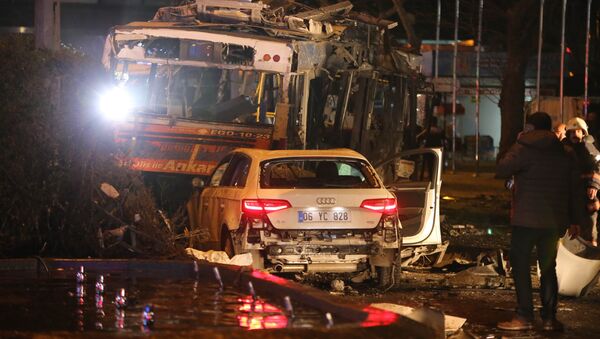 © AFP 2022 / Erol Ucem
Subscribe
An explosion that hit the center of Ankara on Sunday killed at least 27 people, 75 injured.

An explosion at a bus stop in Ankara caused at least 27 people killed and multiple wounded, according to reports.

Some 27 people were killed and 75 injured in an explosion that struck the Turkish capital on Sunday evening, the office of the mayor of Ankara confirmed.

VIDEO: Alleged footage of the moment of the blast in #Ankara #Turkey - @AEJKhalilpic.twitter.com/0xgtNR4z6A

According to reports, a bus laden with explosives blew up near a bus stop, leaving dozens of cars ablaze.

An explosion that hit the center of Ankara was a terrorist attack, which has been caused by a car bomb, the NTV broadcast reported Sunday, citing a police source.

BREAKING NEWS: Reports of as many as 28 dead in Turkish capital explosion. https://t.co/HEn51KlJLV pic.twitter.com/zzpzluXw0O

The police have cordoned the scene of the explosion, where several ambulance cars had arrived.

The Russian embassy in Turkey has not yet received any information on whether Russian citizens have been injured in an explosion in central Ankara on Sunday, an embassy representative said.

"We have not received any information so far," the representative told RIA Novosti, adding that the embassy was checking whether any Russian citizens were injured in the blast.