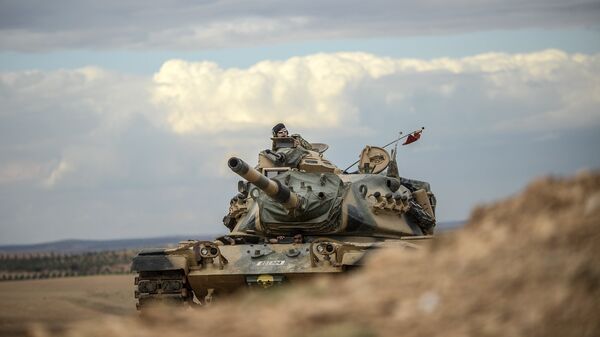 MOSCOW (Sputnik) – The shelling, as well as Turkey allowing arms shipments across the border with Syria, must stop "to provide a more constructive atmosphere for the intra-Syrian talks and a more durable cease-fire," Gatilov said as quoted by Bloomberg on Friday.

Turkey has been shelling the positions of Kurdish People’s Protection Units (YPG) in northern Syria along the Turkish border since February to stop the Kurds from seizing more ground in the area. Ankara considers the YPG to be an ally of the Kurdistan Workers Party (PKK), a separatist movement fighting for Kurdish self-determination in southeastern Turkey.

Earlier this month, the Russian military said that Ankara is fully responsible for continuation of hostilities in Syria's Aleppo and Idlib provinces as Turkey ensures a steady supply of weapons to terrorists and keeps shelling groups of Kurdish militia fighting against Jabhat al-Nusra (Nusra Front) radicals.

'No Ifs or Buts': Turkey Demands US Support Against Kurdish YPG
Syrian Kurds in the northern provinces on the border with Turkey have also been accusing Ankara of keeping the border open for militant groups and supplying them with weapons.

Syria has been mired in civil war since 2011, with government forces loyal to Syrian President Bashar Assad fighting against numerous opposition factions and extremist groups, including Islamic State (ISIL) and Nusra Front, outlawed in a number of countries worldwide including Russia. Syrian Kurds have been fighting against ISIL, also known as Daesh, for years.

On February 22, Russia and the United States reached an agreement on a ceasefire in Syria, which took effect at midnight on February 27.

Talks between the Syrian government and representatives of the country's opposition factions began in Geneva on January 29.