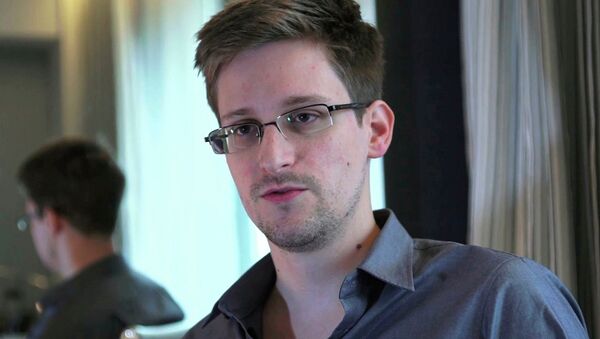 © REUTERS / Glenn Greenwald/Laura Poitras
Subscribe
International
India
Africa
Prominent US whistleblower Edward Snowden slammed US President Barack Obama on Saturday for interpreting the encryption row between the FBI and Apple falsely and urging US citizens not to take absolutist position on privacy and security.

MOSCOW (Sputnik) — On Friday, Obama refrained from commenting directly on the case in which the FBI is forcing Apple to access the phone used by San Bernardino attacker Syed Farook, but noted nevertheless that if the government "can't get in, then everyone's walking around with a Swiss bank account in their pocket."

"The President of the United States just yesterday spoke itself at the South by Southwest [festival] on the Apple/FBI controversy, and he again contextualized that in a false choice between privacy and security. The reality is [that] we can have both," Snowden said at the Logan CIJ Symposium, adding that without privacy there could not be security.

Snowden Dismisses FBI Claims Only Apple Can Hack iPhone
In February, a California court ordered Apple to create software that would allow FBI to unlock the iPhone of Farook, who killed 14 people in December 2015. Apple has appealed against the court's decision.

Apple maintains that opening the iPhone would compromise the security of all its devices, and has refused to give in to the US government’s demands.

The next hearing on the case will take place in California on March 22.