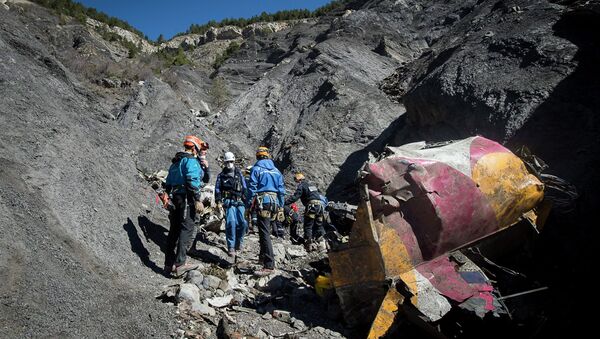 © REUTERS / French Interior Ministry/DICOM/Y. Malenfer/Handout
Subscribe
A doctor recommended copilot Andreas Lubitz, who intentionally crashed a Germanwings passenger plane into the mountains in March, 2015, to be hospitalized two weeks before the accident, media reported, citing a draft report of investigation into the crash.

Pilot of Doomed Germanwings Flight Revealed Neurotic Thoughts to Doctor
MOSCOW (Sputnik) — On March 24, 2015, the Germanwings Airbus A320 flying from Barcelona to Dusseldorf crashed in a remote area of the French Alps killing all 150 people on board. According to the information from the plane’s black boxes, Lubitz deliberately crashed the plane after locking the pilot out of the cockpit.

The Wall Street Journal reported on Friday, citing a draft of the final report of France’s BEA crash investigation agency, that on March 10, the doctor gave Lubitz a recommendation for psychiatric hospitalization.

The newspaper added that the doctor had not informed Germanwings, because he was afraid of breaching Germany's privacy laws.

The final 87-page report of the BEA is expected to be released on Sunday. It is expected to include the final version of the crash circumstances and recommendations for the pilots to voluntarily report psychiatric issues and to seek for appropriate help in case of health problems.