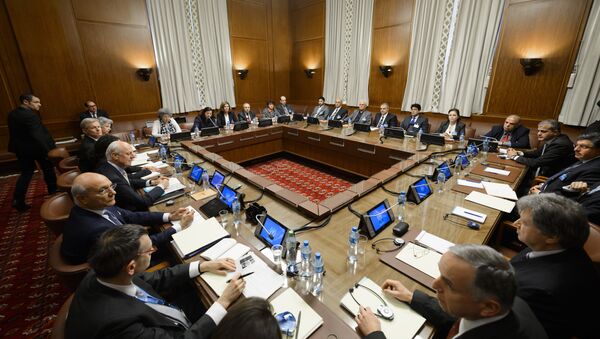 The composition of the Syrian government delegation will not change for the next round of talks.

Intra-Syrian Talks to Resume March 9 in Geneva
MOSCOW (Sputnik) — The composition of the Syrian government delegation to the peace negotiations in Geneva will remain the same as at the previous round of talks, the first secretary of the permanent Syrian mission to the United Nations told Sputnik on Friday.

According to Daghman, Former Syrian Envoy to UN and Deputy Foreign Minister Faisal Mekdad is not expected to participate.

The delegation will arrive in Geneva on Sunday morning, the first secretary said.

"We want greater participation of various opposition groups, that are called the Syrian opposition or the Syrian society. We do not want the presence [at the negotiations] to be limited to a particular group or one delegation that is called opposition," Daghman added.

The new round of intra-Syrian talks in Geneva is set to be held between March 14 and 24.

The first round of talks between the Syrian government and representatives of the country's opposition factions began in Geneva on January 29. On February 3, UN Special Envoy for Syria Staffan de Mistura decided to postpone the talks as the parties were unable to reach a compromise on a number of issues. The opposition and government delegations blamed each other for the breakdown of the talks.