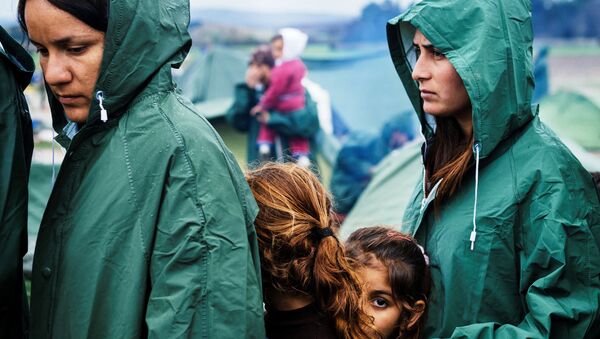 © AFP 2023 / Dimitar Dilkoff
Subscribe
International
India
Africa
Lawmakers in the European Parliament claim the deal brokered - at the behest of German Chancellor Angela Merkel - between the EU and Turkey on relocation of migrants and refugees is in breach of the Geneva Convention.

Under the deal brokered on Monday, the EU would pay another tranche of money to help Turkey deal with its refugee crisis in return for a series of measures that includes the EU sending "irregular migrants" from Greece back to Turkey, in return for the EU taking in Syrian refugees in Turkey on a one-for-one basis, which many believe goes against international law.

Former Belgian Prime Minister Guy Verhofstadt, who is now leader of the Group of the Alliance of Liberals and Democrats for Europe (ALDE) said:

"Europeans will block all refugees who are looking for protection and it will be Turkey and Erdogan who will decide on an individual basis who is a political refugee and who is not, who can enter in Europe and who not."

"I find this hugely problematic. This is a type of collective 'refoulement' forbidden by the Convention of Geneva. Turkey has not fully adhered to the Geneva Convention and is rapidly falling into autocracy," he said.

The EU-Turkey #refugees deal is like the Americans asking the Mexicans to manage the border, says @guyverhofstadt https://t.co/0i00SnyJgY

"The EU-Turkey deal is not a sign of strength, but a sign of weakness of the European Union. This deal is morally reprehensible, the fruit of short-term thinking, not a solution for the long term. Apparently the national leaders prefer a dubious deal with an authoritarian leader, rather than to show courage, vision and to take responsibility for a fully-fledged and sustainable European asylum policy."

"The greatest cause of concern for the UN Refugee Agency and NGOs, relates to the type of legal treatment that 'returnable' Syrians arriving on Greece's shores will receive. Will they still be registered and fingerprinted and when an asylum claim is lodged, will it be duly processed?

"For the plan to succeed on all fronts, including on the basis of international law, it will of course be key that the final agreement clarifies this point, especially since the collective expulsion of foreigners is prohibited under the European Convention of Human Rights," he said.

Joanne van Selm, an independent researcher on migration and refugee issues who recently worked on projects for the European Commission and the UNHCR said: "The aims of the deal — to close down smuggling routes, break the business model of smugglers, protect external borders and 'break down the link between getting in a boat and getting settlement in Europe' — are important.

"However, the one-for-one deal of every Syrian asylum seeker returned to Turkey from Greece being exchanged for one Syrian refugee to be resettled from Turkey to the EU is highly problematic and unlikely to achieve those goals," she wrote in EU Observer.