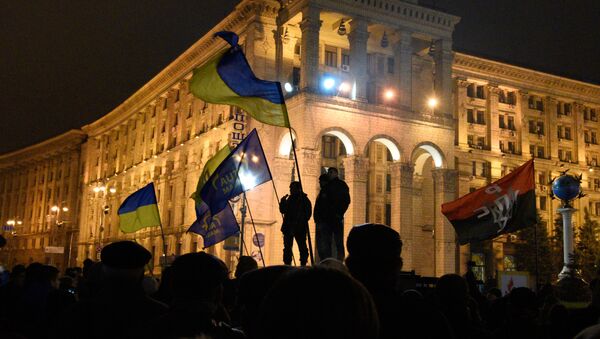 As a result of the Maidan coup, Ukrainians now have a government which will never implement reforms, and the president’s excuses are less and less convincing, a Ukrainian journalist wrote.

However, in fact his resignation served as a "catalyst for public dissatisfaction with old-style corruption practices" restored by President Poroshenko and Premier Arseniy Yatsenyuk, Ukrainian observer Kateryna Kruk wrote in an article for Newsweek.

'Big Mistake': Ukraine Was Forced to Choose Between Russia, EU
"More and more people came forward, arguing ever louder that the new government’s mantra, 'You can’t reform state and wage war at the same time,' was no longer valid. The president’s pleas that 'by breaking unity we will only please our enemy' were less and less convincing," the article read.

Furthermore, public confidence in the government has also been undermined by the fact that Ukraine’s foreign partners are criticizing the government.

"I intentionally use the word 'authorities' because the current crisis is not just the fault of the government or the parliament. Ukraine still has a systemic problem of misuse of power by different state institutions," the journalist pointed out.

According to her, corruption was one of the reasons for the Euromaidan protests, and Ukrainians were struggling to live in a free society ruled by a fair government.

"The current authorities have failed to acknowledge this most basic and most important Euromaidan demand. The culmination of this failure was the sabotage of the no-confidence vote in parliament against Yatsenyuk last month, carried out by groups of deputies close to him, the president and the oligarchs. […] Instead of risking a new election, in which both Poroshenko and Yatsenyuk stood to lose their seats, they kept the status quo and pulled political life in Ukraine back into the Yanukovych era," she concluded.

In February 2014, as a result of a coup Viktor Yanukovych was toppled as Ukrainian president. The new cabinet led by Yatsenyuk declared its course on integration with the European Union and NATO. In April 2014, Kiev launched a military operation in the Donbass and Luhansk Regions where residents refused to recognize the coup-installed government.