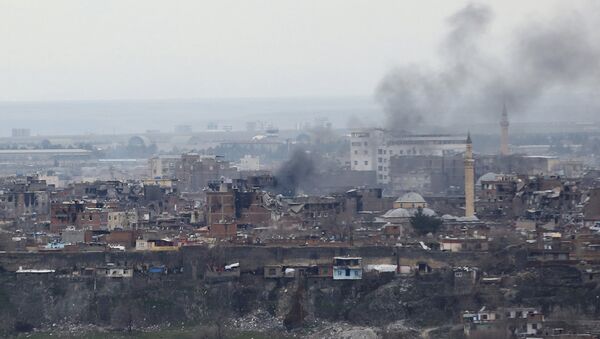 © REUTERS / Sertac Kayar
Subscribe
International
India
Africa
At least 279 members of the Kurdistan Workers’ Party (PKK) militant group, declared a terrorist organization by Ankara, were killed during an anti-PKK operation conducted by the Turkish Armed Forces in the southeastern province of Diyarbakir, the country's General Staff announced in a statement on Thursday.

ANKARA (Sputnik) — On Wednesday, Turkish media reported that Ankara declared an end to its months-long counter-terrorism operation in the Kurdish-populated Diyarbakir, particularly in the Sur district — the historic heart of the province.

"The anti-terrorist operation in Sur is completed. In the course of it, 279 members of the terrorist organization have been killed, 206 barricades have been dismantled, 365 improvised explosive devices have been defused, and 504 weapons, along with more than 48,000 rounds of ammunition, 10 radios and 3.47 kilograms [6.61 pounds] of explosives have been confiscated," the statement read.

Severe clashes between the Turkish Armed Forces and PKK have been arising sporadically in Turkey since a July terror attack in the city of Suruc, which killed over 30 people, most of them Kurds. As Kurds killed two Turkish policemen soon after the attack, Ankara declared a military campaign against the PKK.

In November, Ankara launched the campaign in Diyarbakir. A curfew entered into force the following month amid growing violence and between the militants and the Turkish servicemen.