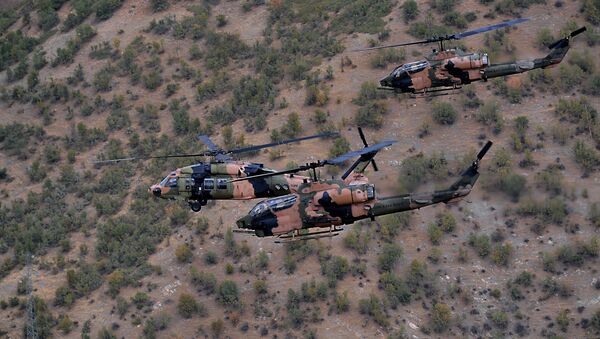 "Today, we approved $5.9 billion worth of new defense projects," Prime Minister Ahmet Davutoglu said after a meeting with Turkey’s Defense Industry Executive Committee on Thursday. "Around $4.5 billion worth of these projects will consist of local production."

The announcement comes as Turkey increases its military export industry. In the first two months of this year, defense exports have already risen by 35%.

The new programs will cover a large swatch of the defense sector. In addition to Turkish-made infantry rifles, which Davutoglu indicated will go into serial production later this year, the money will also go toward the development of more advanced weaponry.

One such product will be the Anka, a medium-altitude, long-endurance drone developed by Tusas Turkish Aerospace Industries (TAI). The UAV underwent successful test flights last month, reaching an altitude of 19,000 feet, and the company will soon move the aircraft into mass production.

TAI will also be involved in the production of T-129 attack helicopters, in association with Italian-British AgustaWestland. Ten of these helicopters were delivered to the Turkish Army last year, and Ankara plans to purchase 17 additional units.

Davutoglu also said that the money will support efforts to produce the engines used in the T-129s.

Sources familiar with the meeting told Defense News that one production program will focus on the development of a new fighter jet, though details have not yet been released, as well as a dual-purpose aircraft meant for both civilian and military use.

While the new agreement is focused on exports, the Turkish government is still spending heavily on military imports. Earlier this month, the Pentagon authorized a $682.9 million contract to provide Ankara with an undisclosed number of smart bombs.

Ankara has been engaged in security operations against Kurdish communities in the country’s southeast and has been accused of shelling Peoples’ Protection Units (YPG) positions in neighboring Syria. While the Turkish government insists these actions are necessary to defend its territory, Kurdish groups deny attacking Turkey.

"I want to appeal to Turkish society about the need to unite to oppose this AKP government policy," Kamuran Yuksek, co-chairman of the Democratic Regions Party, told Sputnik Turkiye.

"The authorities’ actions are creating serious and deep divisions in our society. By its actions, the AKP has formed a society of people who feel satisfaction and joy while reading reports of Kurds killed in Cizre, Silopi, and Sura."

Ankara is also pushing its allies to launch a ground invasion of Syria.

"Turkey isn’t going to engage in a war…But Turkey defends its sovereignty and will respond to any attempt of attack," Turkish Deputy Prime Minister Numan Kurtulmus told 24 TV earlier this month. "I hope that in this case, Turkey won’t have to engage in the conflict alone."