US Needs Israel to Extend Power in Middle East, and Is Willing to Pay Big 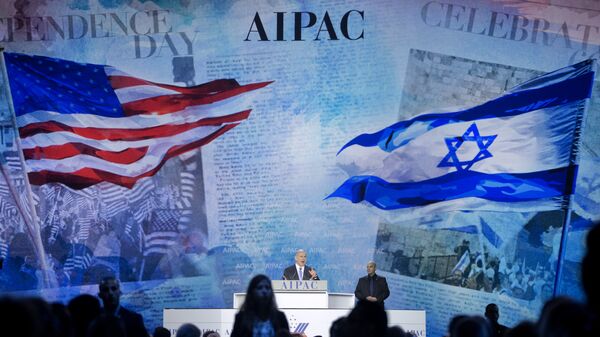 © AP Photo / Pablo Martinez Monsivais
Subscribe
International
India
Africa
US Vice President Joe Biden arrived in Israel on Tuesday, after Israeli Prime Minister Benjamin Netanyahu canceled a visit to the White House scheduled for later in March. Professor Ghada Talhami told Sputnik’s Brian Becker that the relationship between Israel and the US is still defined by Washington lobbyists, and by America’s dominating outlook.

The US has long turned a blind eye to Israeli settlements on occupied Palestinian territories, and during Biden's previous official visit to Israel, the Netanyahu government announced the construction of additional settlements. According to Talhami, one of the reasons why the US cannot take effective action against Israel, America's biggest recipient of foreign aid, is the power of the Israeli lobby in Washington, DC.

"The work of the Israeli lobby has been unbelievable in the United States, to the extent that [Arabs in the US] call the United States Congress ‘Israeli occupied territory'" Talhami said. "This is quite a machine; it has been built over the years and…has managed to restrain the chief executive in our government."

Considering that 2016 is an election year in the US, the Democratic party, represented by Biden and Obama, "cannot afford" an estranged relationship with Israel, Talhami said. This would appear to explain Biden's visit to the Middle East country.

Biden Discusses Syria, Israel-Palestine Tensions With Netanyahu
"Everybody had great hope for [Obama]," the professor stated. "People expected some kind of a different attitude towards at least the Israeli settlements, but he was doing exactly the same thing as his predecessors."

The power of the Israeli lobby is not the only factor maintaining the strong historic alignment between Israel and the United States, the professor asserted. There is also America's geostrategic outlook, in which the US needs Israel to extend its power in the Middle East, a resource-rich and geostrategically important part of the world.

That is, in part, why Israel receives $4 billion from the US annually, mostly in military armament. And now America plans to increase its aid by more than $40 billion over the next ten years.

"United States is not such a weak country that it can be led by the nose by the Israel lobby," Talhami said. "Clearly there are people in the American government…probably the CIA and the military, who still see their interests combined with the interests of Israel, and actually they are happy with the relationship the way it is."

As for the clashes between Israeli settlers, citizens and Palestinians, the professor blames corporate-owned media outlets for feeding the American public lies, as it continually presents the Palestinians as terrorists.

The Price of Failure: German Town Charges Israel for Rescuing Mossad Agents
"There are few Israeli soldiers or civilians, settlers who actually get killed. Most of the people who get killed are Palestinian kids," she said. "The Palestinians also have a right to defend themselves. [They] have rights under international law, and their rights under international law are they should not be occupied, their land should not be taken from them, they should not be abused at the checkpoints on a daily basis."

According to the professor, the only hope now is that Obama "has the courage" to take some action in the final months of his presidency, for example, by withholding American economic aid from Israel, which the country spends to enlarge and secure settlements in illegally-seized territories.