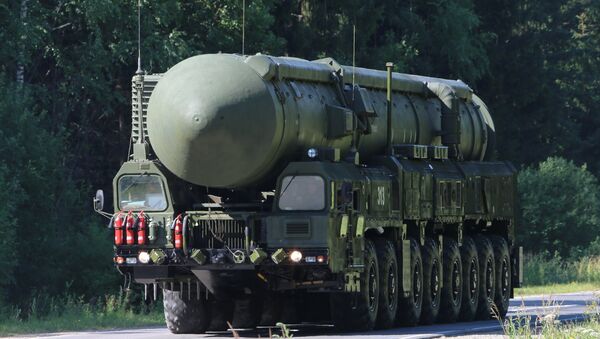 Russia Successfully Test-Fires RS-26 Ballistic Missile
In a Chinese television program aired earlier this month a local defense expert hailed the unique characteristics of the Russian ICBM and the fear it had instilled in the hearts of foreign militaries, Rossiiskaya Gazeta wrote.

“Russia’s new RS-26 missile travels along a continuously changing trajectory and as such it has no analogues in the world,” the expert said.

When asked about the US missile defense system, he said that it was “absolutely useless” against the RS-26.

“This one is even better than the famous Topol-M missile… Its warheads are supersonic and change their course all the time. Some of them will penetrate any existing missile defense shield and will hit their target,” the expert added.

When asked whether the new Russian ICBM had caught the Americans flatfooted, the expert said that not only the Americans were clueless but that the Chinese too now had something to worry about.

“Russia is 100-percent safe now, unlike everybody else,” he emphasized.

What makes the RS-26 so special is that even though it weighs just 80 tons, compared to the 120-ton heft of its RS-24 Yars predecessor, the Rubezh packs a frightening 1,2 megatons into its four 300 kiloton warheads.

With a potential range of 11,000 kilometers the RS-26 can hit targets all across the United States.

Moreover, its booster stage is down to under five minutes, which means that NATO radars in Europe will have no time to register the launch.

Adding to NATO air defenders’ worries, during the descending section of its trajectory, with only a few hundred kilometers left to the target, the missile’s warheads suddenly take a dive, lose altitude, and continue the approach as a cruise missile.

These new Russian ICBM warheads were developed in response to America’s plans to deploy a global missile defense system along Russia's borders.