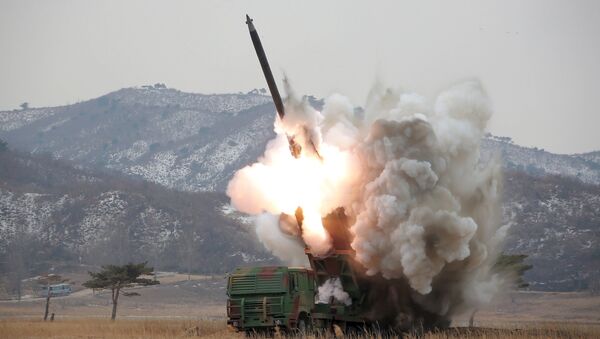 © REUTERS / KCNA
Subscribe
International
India
Africa
Retired US Colonel and military historian Doug Macgregor said that any attempt by North Korea to launch a nuclear warhead on a missile against the United States, South Korea or Japan is more likely to incinerate the launch site.

WASHINGTON (Sputnik) — Any attempt by North Korea to launch a nuclear warhead on a missile against the United States, South Korea or Japan is more likely to incinerate the launch site, retired US Colonel and military historian Doug Macgregor told Sputnik.

"Any attempt to mount a warhead on a missile is fraught with danger at the launching pad," Macgregor stated on Wednesday. "The modest North Korean nuclear stockpile presents more of a danger to North Korea than to anyone outside of the country."

However, Macgregor said there was almost no danger of North Korea being able to target the United States with any nuclear weapon.

"North Korea’s threat to the US mainland is negligible, if that. North Korea is a dead man walking," he maintained.

Macgregor, who holds a Ph.D. in international relations from the US Military Academy at West Point and, said North Korea’s scientists and engineers have been crippled in their efforts to develop long-range ballistic missiles and nuclear weapons by obsolete and extremely limited resources.

"[The country’s] rocket scientists have performed miracles given the terrible working conditions and paucity of resources to support the North Korean missile development program, but the outcome is pathetic," he noted.

Macgregor cautioned that many US analysts took North Korean boasts and threats at face value, and failed to realize that the Pyongyang regime lacked the infrastructure and resources to actually make good on them.

"It’s a mistake to impute too much capability to North Korea. North Korea is weaker now than at any time since US forces approached the Yalu River [in December 1950]," Macgregor added.

The most prudent course of action for the United States should be to work in close cooperation with North Korea’s other neighbours to ensure that Kim was replaced by a more predictable and responsible leader in Pyongyang, Macgregor suggested.

Asia
Seoul Needs to be Ready for Possible Surprise Attacks by N Korea - Official
"This time, China, South Korea and Japan all share an interest in moving him and his regime to the graveyard. We should encourage them to collectively get it done," he concluded.

Doug Macgregor is a US war commander whose squadron destroyed an entire Iraqi Armored Brigade in 23 minutes, while suffering only one casualty, at the Battle of 73 Easting, a decisive tank fight during the 1991 Gulf War.