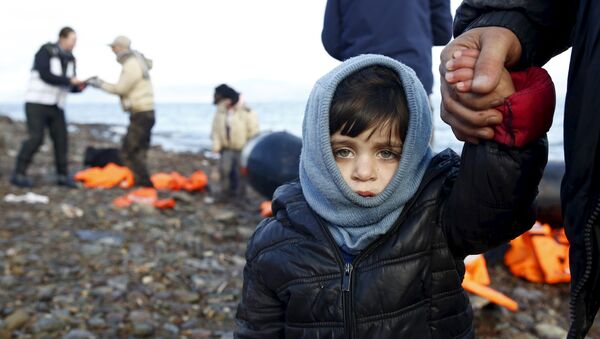 As the Turkish government continues its crackdown on the free press, columnist Kemal Okuyan speaks to Radio Sputnik’s Loud & Clear to expose how this relates to Ankara’s deal with the European Union to stem the flow of refugees.

"I have to say that this is a real dirty bargain," Okuyan, a leading columnist with Turkish newspaper SoL, tells Loud & Clear host Brian Becker. "The refugee crisis, I think, is an outcome of the terrorist acts of NATO, Turkey, and other reactionary forces in the region."

According to Okuyan, Ankara is manipulating the crisis in order to achieve its own ends with the European Union.

"This was on purpose, by the Turkish government," he says. "And we know that Turkey encouraged people to go by boat through the sea to the Greek islands.

"Now they are using this to blackmail the European Union."

As part of negotiations with the EU, Ankara wants over 3 billion euros, visa exceptions, Western ground forces in Syria, as well as the enforcement of a terrorist-free zone in neighboring Syria.

While Turkey may be taking advantage of a humanitarian crisis for its own gains, the European Union isn’t entirely innocent, either.

"The European Union is also one of the actors in the Syrian [conflict]," Okuyan says. "Especially Germany, France, Britain. They have their hands in Syria, so they are also responsible for this big human tragedy."

While the Erdogan government may have sights on joining the EU, it could face problems due to its harsh press laws.

"Nearly three-fourths of the daily newspapers printed in Turkey are in the hands of Erdogan," Okuyan says.

"There are a lot of journalists in prison in Turkey," he adds. "There is also blackmailing, [where] you are not arrested, directly, but they say if you have another problem, then you will be put into prison."

Still, as all sides use the refugee crisis for their own political gain, millions of people are suffering.

"In Turkey, the refugees are in terrible conditions," Okuyan says. "When you see photos of people [who have] died when crossing to the Greek islands, these are not only accidents, they are killed on purpose for their money.

"They sabotage the boats."