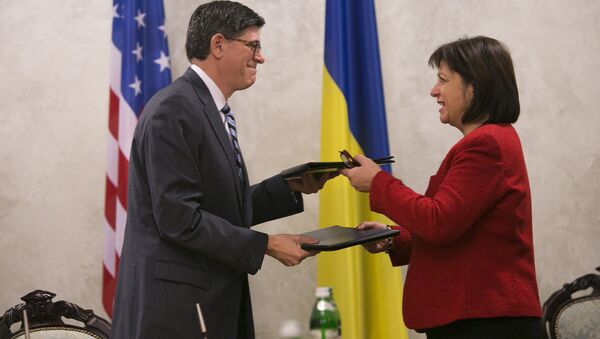 A cast of colorfully corrupt characters, Including former Georgian puppet leader Saakashvili, are involved in the blatant US takeover of a country on Russia’s doorstep, one geopolitical analyst told Sputnik.

​The US colonial experiment in Eastern Europe has taken on a new urgency this week with speculation that an American citizen, Natalie Jaresko, will be announced as the next Prime Minister of Ukraine. Geopolitical analyst Daniel McAdams, of the Ron Paul Institute for Peace and Prosperity, discusses the developments with Loud & Clear's Brian Becker.

Natalie Jaresko is an investment banker who became a Ukrainian citizen in December 2014 after being appointed the country’s finance minister.

"The first thing that Jaresko did as finance minister is she sent a letter to John McCain saying they need more weapons, she is a corrupt war hawk," McAdams told Loud & Clear. "She is representative of the worst, most corrupt type of Americans that are sent into these countries."

McAdams details that Jaresko "was hooked up into a USAID enterprise fund that was capitalized with $150 million and it is supposed to show the locals how wonderful capitalism and democracy is."

"What it really shows Ukrainians is how rich you can get if you are a phony, fake capitalist. Out of these funds, she paid her own company millions of dollars in fees. She is just a corrupt disaster."

Is Ukraine a failed state at this point?

"It really is a laughingstock of a nation," says McAdams. "The US was saying the reason why Yanukovych had to be overthrown was this terrible corruption, we're going to get rid of this terrible government and we are going to bring in this new government that is the model of democratic reform. Well, look at how Ukraine has sunk."

"The corruption is worse now than it ever was under Yanukovych," McAdams continues. "The economy is nonexistent, regular infusions of US money are the only thing that keeps the country alive, and politically it cannot get anything done because fights regularly break out in parliament."

Mikheil Saakashvili, the US-supported former president of Georgia who led his country into a ruinous and unnecessary war with Russia, has incomprehensibly reemerged as the US-supported Governor of Ukraine's Odessa Oblast. Brian Becker asked McAdams whether this is “a coup d'etat following another coup d'etat in Ukraine?"

"It is very fitting that Saakashvili is now playing a role in trouncing democracy in Ukraine at the behest of the US, he has done it before," McAdams remarks. "In Georgia, when the people took to the streets to demand the overthrow of their corrupt leadership, the US tapped Saakashvili who was dramatically more corrupt and repressive than the prior leadership, his views on the media are something out of the dark ages."

"Yes," answers McAdams. He says the US has already "fixed" Ukraine, so "we're now on our way to fix Syria, and don't forget we fixed Libya a few years ago."

He notes that Americans are distracted by the presidential election cycle and local current events. "The attention span is pretty short for Americans with these revolutions.” The US model of interventionist policy is "like a kid who breaks their toys and then become disinterested with them," McAdams adds.

"It is a poetic ending. We used to give the locals some control over the composition of the governments that we overthrew and now we have tossed that aside so that we actually send American citizens as proconsuls to run these places."

In McAdams’ opinion, the US has become "a cheap knock off of the Roman empire."

Poroshenko says Ukraine's top priority is NATO ascension, but is this really about containing Russia?

Secretary of Defense Ashton Carter announced that the US will quadruple its military spending in Europe and send more troops into countries that it has never been to before, and ramp up its presence on Russia's border, explained McAdams.

"It is all about encircling Russia and then if Russia makes any sounds then the word is how Russia is militarizing. The overthrow of Ukraine's leadership is only about the US strategic interests"

The "new" Cold War: a fiction propagated by the West’s defense-industrial complex

Becker observes that in the Pentagon Quadrennial Defense Review, Russia is named as the number one threat to the United States, resulting in  not only an expansion of US military exercises but subsequent profits for the military-industrial multinational corporations, justified on the grounds that Russia is supposedly on the march.

“This whole thing is being led by neoconservative think tanks,” McAdams agrees. “Look at the Institute for the Study of War run by Kimberly Kagan, her donors are Raytheon and the other bomb makers."

As McAdams explains, the entirety of US interventionist foreign policy is driven by simple motives: corporate profits and shareholder value.

"The military-industrial complex openly funds these think tanks that set the policies and call for more war and it keeps these neoconservatives in enormously well-paid positions in Washington. The idea that Russia is a threat is simply good for their bottom line."

McAdams said there is a "joke in Washington, if you are involved in an area and your recommendation is to do less, that isn't good for your career. If you are a foreign policy expert, then you want more foreign policy. Unfortunately, the breaks are completely off and the country is going insane."