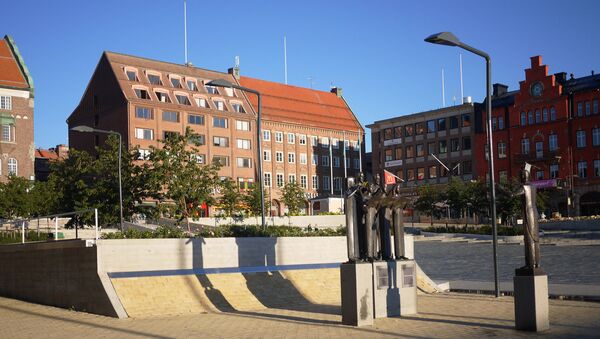 © Flickr / Britt-Marie Sohlström
Subscribe
Police in the Swedish city of Ostersund made an announcement about a recent increase in violence against women, and warned them not to go out alone at night; their recommendation was criticized by the local mayor.

Swedish Liberals Propose Abortions for Men
Police in Ostersund, an urban area in central Sweden, have come under fire from politicians and members of the public for suggesting that women should not go out at night because of fears for their safety.

On Monday local police chief Stephen Jerand disclosed that a string of sex attacks have taken place in the local area in recent weeks, and urged women to stay indoors at night.

"It is alarming and we would advise caution. We recommend that people, especially women, not to go out at night," Jerand told a press conference, Ostersunds-Posten reported.

The police said that six cases of violence and sexual assault against women have been reported to them since February 20, including an alleged attempted rape by three men in central Ostersund, and the alleged molestation of a ten-year-old girl at a bus stop.

In one of the cases the alleged perpetrator was captured by police in Germany after attempting to flee the country; in the other cases the perpetrators remain at large.

"We believe there may be more cases that have not yet come to light," Jerand told the press, and urges witnesses to the attacks to come forward with information.

The Hawks Have Landed: Finland and Sweden Mull Military Union
Following the police warning Mayor of Ostersund Ann-Sofie Andersson criticized the police recommendation for women to stay indoors, and said that she would have preferred the police to consult her first before going public with such advice.

"It's obviously serious if the police think that women should not be able to go anywhere they want to. But the solution is not to go public with such a request," Andersson, a representative of the Social Democrats, told SVT.

"We have very many women who work as home help or work night shifts, for example. What is one to do?"

"It is wrong to call for women to adapt to the criminals," Hedin said.

"It risks leading people the wrong way, if the victims must adapt to the perpetrators."

On Tuesday police chief Jerand responded to criticism from politicians and the public, who used social networks to express their disagreement.

'This March 8, women are not free to go out in Ostersund,' tweeted one internet user in response.

"We did not want to wake up and have more victims," Jerand said.

"We are not limiting freedom for anyone. This is purely factual information. We went out with warnings and some have interpreted that we forbid women to be out in town and that's completely wrong," Jerand said.

000000
Popular comments
Interesting development. Some 10 years ago the Swedish Church and politicians discussed a proposal to tone down or even entirely ban church bells as these might offend "our new Swedes" (of which some 95% are of (sunni-wahhabi) Muslim faith). That was not a joke, in a country that have heard bells and were people have been and still is baptised and married at church for a1000 years, now you will only hear church bells on major occasions and for a far shorter period of time than before, otherwise it´s quiet.