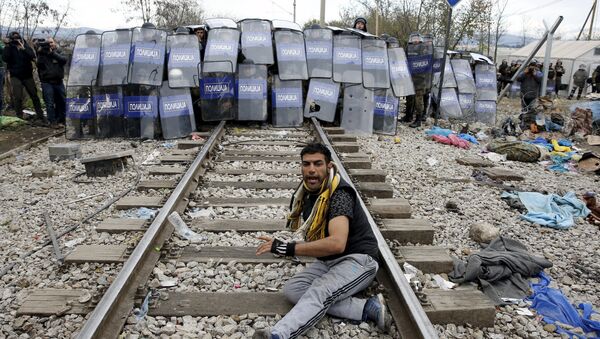 Brussels' scheme to close the 'Balkan route' for illegal immigration through Greece puts the country in a difficult and humiliating situation, comparable to the betrayal of Czechoslovakia by Western powers in 1938, says French lawyer and academic Alexis Teas.

In an op-ed for France's Le Figaro, Teas suggested that the current migrant crisis is one of the worst tragedies Europe has faced since the end of the Second World War.

"More than a million arrivals in 2015 – an influx which has continued to grow since the start of this year; the consequences are disastrous, leading to continental-wide social breakdown, the return of nationalist tensions, and popular anger exacerbated by the proliferation of slums and refugee camps."

"The extraordinary March 7 summit on migration issues in Brussels suggests that [the continent's leaders] have realized, belatedly, what's going on. Convened on the initiative of the German chancellor, who has become the de facto leader of the continent, the summit focused on two priorities: an agreement with Turkey urging Ankara to hold back some of the refugees, and the closure of the migration's Balkan route."

As far as the first question is concerned, Teas argues that it is completely legitimate for Europe to demand that Turkey keep a portion of the refugees it accepts, since "one of the overriding principles of asylum law is that the victims of persecution do not have the right to choose the place where they are held," and must settle in the first place where they are made safe.

"As for economic migrants, in other words – illegal immigrants, Turkey should not push them into Europe. Ankara's role, under international law and readmission agreements, is to return them to the country from which they came."

At the moment, Teas suggests, "Mr. Erdogan's Turkey seems to be engaged in a showdown with Europe, using a form of blackmail by conditioning its aid to migrants to accession to the EU, which would open it unlimited access to the European labor market and billions in structural funds. Yielding to these conditions would make Europe Turkey's hostage."

Turkey's Goal of Joining EU 'Poses an Existential Problem for the West'
As far as the summit's second question – on the closing of the Balkan route of European migration, the lawyer suggests that "it's enough to take a glance at a map to understand the essence of the formula: it factually means abandoning Greece, with its hundreds of thousands of migrants scattered across makeshift camps."

"This sinister choice has the aftertaste of the Munich Agreement of September 1938, under which the democracies gave Czechoslovakia to Hitler. The cowardly abandonment of this country, the cradle of European civilization, is emblematic of a Europe that is disoriented, rootless and drifting…"

Ultimately, Teas notes, one should not count on Turkey fulfilling its obligations in good faith, in this case, to save Europe, "nor on Greece playing the role of a scapegoat, sacrificing itself on behalf of our continent's collective errors."

"There is only one solution to this drama: Europe, through the governments of its five or six largest states, should, on an equal footing, take its destiny into its own hands." They have a "historical responsibility" to struggle against the smugglers, "those who accumulate fortunes by throwing millions of poor into the sea."

Greece, Cyprus Concerned With Turkey's Demand to Accelerate EU Accession
Europe has a duty to get them to comply with international law and with borders, to control the shores from which criminals send the boats laden with refugees to their countries.

"But is Europe in the face of its current leadership capable of getting out of its suicidal stupor and regaining its political will and respect the rule of law?", Teas asks.

At the moment, he warns, "it doesn't seem to have found the way." And, as far as France is concerned, "given the gravity and severity of the events, May/June 2017 [when France is set to hold its next presidential elections] seems light years away…"