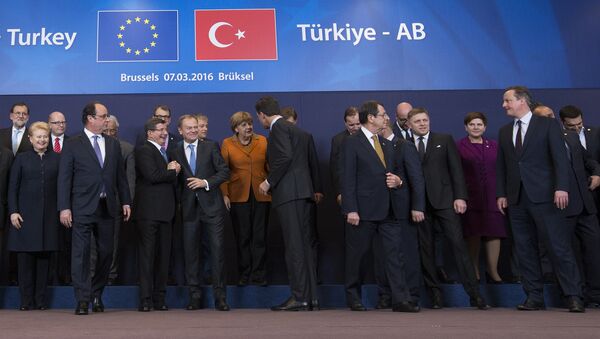 © REUTERS / Yves Herman
Subscribe
International
India
Africa
The leaders of the 28 EU countries and Turkish Prime Minister Ahmet Davutoglu have agreed on a new migration plan; its six principles are due to put an end to illegal immigration to the bloc from the Middle East via the Balkan route and restore the Schengen Agreement.

Erdogan’s Suggestion of a ‘Refugee City’ in Syria is Only a Smokescreen
MOSCOW (Sputnik) — Turkey pledged to take back all illegal migrants that had arrived to the European Union and send in their place legal Syrian refugees to the bloc on one-for-one basis in exchange for the acceleration of visa liberalization negotiations, as well as EU accession talks and a previously-agreed-to sum of 3 billion euros ($3.29 billion at the current exchange rate). The sides are also committed to jointly improve the humanitarian situation in Syria. A final agreement based on these principles is expected to be arrived at during the next summit on March 17-18.

Monday's EU-Turkey summit was the second such event after November's talks, when Brussels and Ankara drafted a joint action plan, under which EU member states pledged to pay Turkey 3 billion euros over the next two years and fast-track Ankara’s EU accession talks in exchange for efforts to limit migrant arrivals.

Legal Instead of Illegal

German Chancellor Angela Merkel said that Turkey's proposal to exchange illegal migrants arriving in Greece for Syrian refugees from Turkey would be a "breakthrough" if it were implemented.

"We agreed to work on the basis of the following principles: the return of all new irregular migrants crossing from Turkey into the Greek islands, the acceleration of the implementation of the visa liberalization roadmap, the speeding-up of the disbursement of three billion euros and additional funding for the refugee facilities for Syrians, the preparation for the opening of new chapters in the accession negotiations, the possibility of establishing in Syria areas which will be more safe and, finally, the resettlement of Syrian refugees on a one-for-one basis," Tusk said.

The European Union also intends to support Turkey's efforts to improve the humanitarian situation in several areas of Syria in order to allow the population to live in a safer environment, according to a joint statement issued by the EU heads of state or government on Tuesday.

Ankara has repeatedly called for the establishment of a no-fly zone in northern Syria, and criticized the United States for not backing the proposal. The European Union has not supported the initiative.

The migration agreement and cessation of the influx of illegal refugees also puts an end to the Balkan route used by migrants who have been traveling from Greece through Macedonia, Serbia and Hungary to Austria and Germany.

Turkey's Erdogan Is 'Complicit' in Europe's Migrant Crisis
The wave of illegal migration throughout the Western Balkan route is now coming to an end, and the EU leaders have agreed to assist Greece and provide it with significant humanitarian support, Tusk said.

The leaders of the EU member states have approved the European Commission's plan to resolve the migration crisis in order to achieve the cancellation of unilaterally-imposed border controls within the Schengen Area before the end of the year.

French President Francois Hollande said that there was no Europe without the Schengen Area, and that with the agreement reached on Monday it had become possible to prevent the collapse of Europe.

The plan also envisages Greece eliminating the lack of control on the Schengen area's external borders, while Schengen member states should stop letting migrants cross through their territories to other states.

Belgium, Denmark, Germany, Hungary, Austria, Slovenia, Switzerland and Norway have introduced border controls amid the influx of refugees to Europe.

The participants of the summit also agreed to promptly prepare a decision on the opening of new chapters of Turkey's accession negotiations to the European Union and to speed up the implementation of agreements on visa-free regime.

Turkey hopes that its citizens will be able to arrive in the Schengen Area without applying for a visa, Davutoglu said.

As for Turkey's accession to the bloc, these negotiations are far from completion, according to Hollande. German Chancellor Angela Merkel said that opening new chapters of the negotiations would be difficult given Cyprus' resistance. According to her, Turkey's membership of the European Union is not on the agenda at the moment, but the strategic cooperation is critical.

Turkey signed an association agreement with the European Union in 1963, and submitted a membership application in 1987. Talks about Ankara's membership of the bloc began in 2005. The Cyprus dispute and Turkey's record of encroaching on press freedom are among the major issues obstructing Turkey's accession.

The sides have also agreed to accelerate the allocation of funds provided to Turkey, so that the first projects receive financing at the end of March, and make a decision on an additional financing mechanism to help the Syrians.

Brussels could allocate further funding for Turkey in late 2018 in case Ankara needs to introduce additional measures to take back migrants, Hollande said.

Final Agreement Expected During Next Summit

A more detailed agreements are due to be developed on the basis of the agreed principles within a week for their further discussion during the next summit on migration on March 17-18.

Tusk is expected to work out details of the new migration plan with Turkey before the next EU summit, Luxembourg Prime Minister Xavier Bettel said.

Davutoglu confirmed his intention to return to the EU summit on March 18.