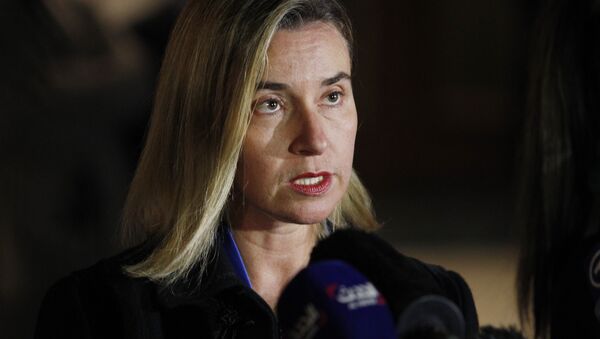 European Union foreign policy chief Federica Mogherini said that despite a few violations observed throughout parts of Syria, the sides to the conflict generally adhered to their commitments.

"This is probably the first time in five years of conflict that we see in many parts of Syria no major armed intervention, even if as I said breaches are happening continuously," Mogherini said in opening remarks to the European Parliament in Strasbourg.

EU to Open Damascus Office to Provide Humanitarian Aid to Syria – Mogherini
She noted that, despite a few violations observed throughout parts of the Arab republic, the sides to the conflict generally adhered to their commitments.

"However, the overall assessment is that the ceasefire is holding, and that the situation on the ground for this whole week has been significantly improved compared to all the previous weeks of the conflict," Mogherini stressed.

Terrorist organizations that have seized parts of Syria are not covered by the agreement reached between Moscow and Washington on February 22.

Special UN Envoy for Syria Staffan de Mistura is expected to convene the latest round of indirect intra-Syrian talks in Geneva on Wednesday. His spokeswoman confirmed earlier on Tuesday "substantive meetings" would begin no later than March 14.