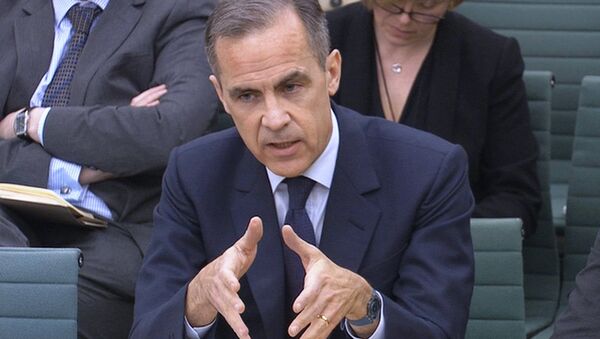 © REUTERS / UK Parliament
Subscribe
The Governor of the Bank of England Mark Carney has admitted that the status of the City of London would be adversely affected in the event of the British people voting to leave the European Union in an In-Out referendum due to take place on June 23.

Carney was giving evidence to UK lawmakers on the House of Commons Treasury Select Committee and was asked about reports that banks and other financial institutions could desert the City of London in the event of a Brexit. When asked about rumors that some may no longer base their headquarters in the capital, he replied:

"Certain firms would take a view in terms of relocation."

His admission will come as a boost the UK Prime Minister David Cameron, who is leading the campaign for the UK to remain in the EU — despite deep divisions within his own party over the issue and a rise in Euroskepticism in the country as a whole.

Cameron was angered when the Mayor of London, Boris Johnson, threw his weight behind the campaign to leave the EU — sparking off a huge row over the effect it would have on the City of London which is a world financial center, housing the Stock Exchange, leading international banks and other financial institutions.

​The City of London's contribution to the UK's national income —  Gross Value Added (GVA) —  is estimated at is estimated at US$64 billion in 2014, or 3 percent, while London accounts for US$475 billion or 22 percent of the UK's GVA, according to the Center for Cities and Cambridge Econometrics, in June 2015.

London as a whole made a net contribution of US$48 billion to the UK Exchequer in the tax year to the end of March 2014, generating US$180 billion in tax revenues, representing 21 percent of total UK tax receipts, according to CEBR, London's Finances and Revenues, in November 2014.

In a letter to the lawmakers published Tuesday, Carney said:

"EU membership reinforces the dynamism of the UK economy. A more dynamic economy is more resilient to shocks, can grow more rapidly without generating inflationary pressure or creating risks to financial stability and can also be associated with more effective competition."