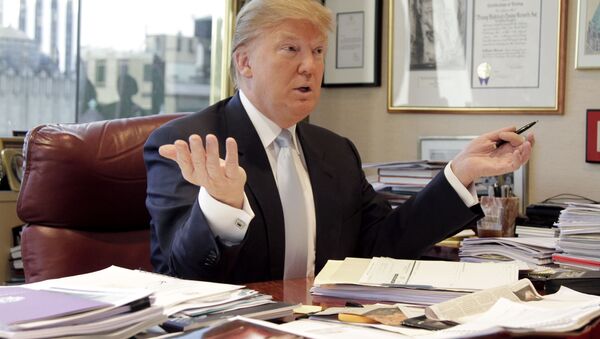 © AP Photo / Richard Drew
Subscribe
International
India
Africa
New reports are shedding an unflattering light on Donald Trump’s relationship to a notorious mobster who frequented Trump’s Atlantic City casino, which was reportedly fined $650,000 over catering to the man’s dislike of women and minorities.

The daughter of Robert LiButti, a mobster affiliated with John Gotti, has come forward with new details of the Republican presidential front-runner’s ties to her father.

Investigative reporter Michael Isikoff detailed how in 1991 an investigation was launched into the casino after complaints were made by nine employees about having to remove women and minorities from the tables where LiButti was playing.

“He did not want women, blacks or other minorities dealing or supervising his games,” a filing by the state Division of Gaming Enforcement, obtained by Isikoff, stated. Libutti also allegedly referred to an employee as a “dumb c*nt” and “dumb b*tch,” another as a “Jew broad,” and an African-American dealer as a “black bastard,” Isikoff wrote.

Employee complaints about the casino’s willingness to cater to the hateful mobster resulted in a fine of $200,000.

“He’s a liar,” said Creamer. “Of course he knew him. I flew in the [Trump] helicopter with [Trump’s then wife] Ivana and the kids. My dad flew it up and down [to Atlantic City]. My 35th birthday party was at the Plaza and Donald was there. After the party, we went on his boat, his big yacht. I like Trump, but it pisses me off that he denies knowing my father. That hurts me.”

The allegations that Trump was closer to LiButti than he lets on are further detailed in a book called “Trumped!: The Inside Story of the Real Donald Trump — His Cunning Rise and Spectacular Fall,” by John R. O’Donnell, where he recounts a story of the mobster selling Trump a horse.