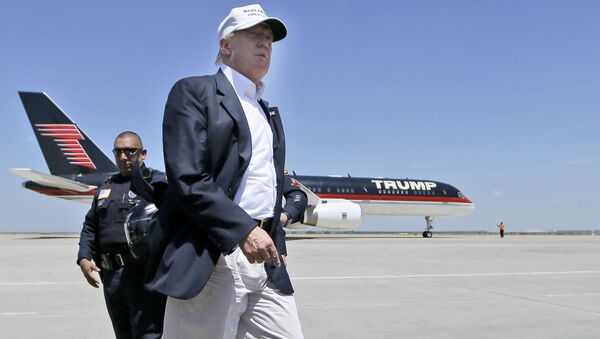 © AP Photo / LM Otero
Subscribe
As the race for the White House heats up, Russian observers have noticed something different this cycle: that one of the race's leading contenders isn't anti-Russian, for a change. Political analyst Gevorg Mirzayan takes a closer look at candidates Clinton, Sanders and Trump, trying to fathom their positions on Russia.

"Russian experts and the public are watching the US election campaign very closely, trying to figure out what Russian-American relations are going to look like after November 2016," Mirzayan noted, in his recent analysis for Expert, a leading Russian business magazine.

"Usually, the importance of [the US presidential race] is somewhat exaggerated. Following the election, any new American president is automatically embedded within the existing paradigm, and almost always continues to toe the line of his predecessor. However, this time round, a unique situation has emerged, in that essentially, there is no paradigm."

NATO Ramps Up Anti-Russian Propaganda Just as Syria Reaches Peace
The crisis in Russian-US relations which emerged over Ukraine "has nullified most of the rules and pillars of Russian-US relations (with the exception of strategic concepts such as deterrence)," Mirzayan says. "Washington's two year attempt to force Moscow to resume living according to these rules has failed, and the Kremlin and the White House must now work out new ones."

"Naturally, the initiative must come from Washington. The Kremlin has made its conditions clear to Americans, and now they have to respond by formulating their own. And since Obama is either unwilling or unable to do so, this problem will lie on the shoulders of his successor."

At the moment, "opinion polls suggest that the leader [in the campaign] is Hillary Clinton. Russian experts are unanimous in saying that she would not be the successor that Russia would like. It's true that in some areas the former first lady is against Russia's isolation. For example, she has said that Moscow (and Tehran) should be part of any effort to resolve the situation in Syria. However, this does not change her view of the Russian president as a 'bully'."

Republicans Cruz, Trump on Tie, Democrat Clinton Lead on Super Saturday
"He's someone that you have to continually stand up to, because like many bullies he is someone that will take as much as he possibly can unless you do," Clinton said at a debate back in January.

"In fact," Mirzayan suggested, "this is a very important statement, showing that Hillary looks at relations with Russia as one of confrontation, in accordance with a strategy of containment. It is for this reason, for example, that she advocates for NATO's expansion, and accentuates the bloc's anti-Russian character."

In this regard, the analyst noted, "there's nothing strange in Hillary's approach."

Speaking to Expert, Leonid Polyakov, a professor of political science at Russia's Higher School of Economics, said that "for the Democrats, the foreign agenda and the idea of America's dominant role as a 'beacon of humanity' is an obsession — an idée fixe from which virtually all the problems of the contemporary world arise. Americans, guided by the concept that they 'are the beacon of humanity – the exceptional nation', give themselves a kind of carte blanche to interfere in the affairs of any country across the globe."

"Of course," Mirzayan noted, "this does not mean that the Republicans are pure pragmatists; among them too there exist idealists like the neoconservatives. For the most part, however, it is the Democrats, and especially those who were part of Bill Clinton's administration, and have now passed into the team of his wife, who dream to return Russian-US relations to the paradigm which existed in the Clinton years. Or, if the Kremlin is opposed (and it is), to engage in deterrence."

Churchill's Fulton Speech 70 Years On: What's Changed? What Hasn't?
"In any case," the analyst explained, "today, the strategy of containment is not only ineffective, but also counterproductive. Russia is not the Soviet Union, with its pretension for global supremacy."

"It makes no sense to hold Russia back, because it lays claim only to that which belongs to it as a great power (i.e., a sphere of influence in the former Soviet Union, and the right to participate in the European security system). And sensible experts are unanimous in noting that if Washington wants to improve relations with Moscow, it will have to recognize Russia's status as a great power and, accordingly, the rights that come with that status."

Should Russians Feel the Bern?

Bernie Sanders, Mirzayan says, would be "more interesting and  favorable for Russia. Yes, he too disapproves of Moscow's actions," particularly as far as the Ukrainian crisis is concerned. Like Clinton, Sanders too has pledged that Russia "is not going to get away with aggressive action" in Europe or elsewhere.

Senator Bernie Sanders Wins Democrats' Presidential Primary Vote in Maine
"However, for one thing, the senator from Vermont, unlike Hillary, does not consider Russia as the number one threat to the United States in the modern world, giving that honor to North Korea, with its unpredictable, nuclear-armed regime."

"Secondly, if he were to come to power, Sanders wouldn't have time for conflict with Moscow – he would enter into a severe deadlock with Congress in attempt to fulfill his campaign promises and build European-style socialism in the United States."

"Unfortunately (or fortunately) for Russia, the probability of Sanders winning is extremely small; he would do very well in the general election, perhaps even winning against the Republicans, but he is unlikely to win the Democratic primaries, since he cannot compete with Hillary's money and the power of the Democratic establishment."

'Wouldn't It Be Nice': Trump Would Like to Improve Relations With Russia
Republican presidential hopeful Donald Trump's chances, on the other hand, are better, Mirzayan says. "And he, judging by his rhetoric, is ready to improve relations with Russia. The media have widely quoted his words of admiration for Vladimir Putin, and his readiness to cooperate with Russia on various issues in world politics."

"Some experts from countries which now serve as the US's anti-Russian outposts have already begun to feel the loss of interest in their states."

"If Trump becomes the president of the United States, he will give his friend Vladimir Putin the Baltic States, Ukraine and Syria," Latvian politician Uldis Osis recently warned.

And ultimately, Mirzayan argues, there's a hint of truth here. Trump doesn't intend to spoil relations with Russia for the sake of the hysterical outcries of Eastern Europe's most anti-Russian political elites.

"Yes, he will demand that Moscow account for US interests (for example, suggesting that Russia should give up Snowden), but he does not intend to continue the confrontation with respect to the Kremlin."

"Of course, it is difficult to make serious conclusions on the basis of pre-election rhetoric, especially when it comes from a man like Trump," the analyst noted. "As was rightly pointed out in an angry open letter by American neocons, he 'swings from isolationism to military adventurism within the space of one sentence.' However, unlike Hillary, Trump is free from any commitments, both financial and political, and of any ideological hang-ups. He is a businessman, and is ready to build relations with his partners on a pragmatic basis. And the Kremlin could not ask for anything more."

000000
Popular comments
For better or for worse the Americans really have no choice but to elect Trump unless they want to continue the hegemony of the Clinton gang. Look what the Bush royalty clan did to America it was definitely not for the better of the Americans of the average worker. Hillary is the ultimate politician, will lie through her teeth to get what she wants and carries too much baggage of the 1%

siberianhusky
7 March 2016, 20:44 GMT5
000000
Good God...I want none of them.....i think that the only good part of the analysis is..."Usually, the importance of [the US presidential race] is somewhat exaggerated. Following the election, any new American president is automatically embedded within the existing paradigm, and almost always continues to toe the line of his predecessor. However, this time round, a unique situation has emerged, in that essentially, there is no paradigm." ......I just imagine myself counselling someone voting Trump....no no one