N.Korean Threats Cannot Be Ignored as Efforts Needed for Deescalation 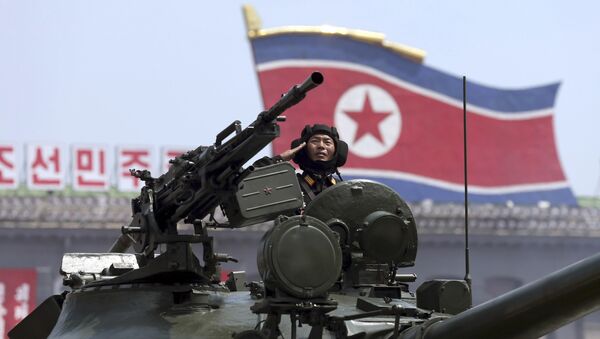 © AP Photo / Wong Maye-E, File
Subscribe
International
India
Africa
The international community should stand firm but seek to deescalate even verbal confrontations with North Korea and also try to find a path forward on negotiations, according to experts.

Asia
Moscow Calls on N Korea, S Korea, US to Restraint Amid Joint Drills
MOSCOW (Sputnik), Alexander Mosesov — The international community should not ignore North Korea’s military and nuclear threats, as more efforts are needed to deescalate the situation on the Korean peninsula, experts told Sputnik.

On Sunday, South Korea and the United States began their largest-ever joint exercises amid increased tensions on the Korean Peninsula. On Thursday, North Korean leader Kim Jong Un ordered the military to prepare to use its nuclear weapons at any moment in light of the exercise, according to the country’s state media reports.

"We should never ignore North Korean bluster. But not can we capitulate… We should stand firm but seek to deescalate even verbal confrontations and also try to find a path forward on negotiations," Brookings Institution Foreign Policy Program Research Director Michael O'Hanlon said.

Asia
S Korea-US Drills Focus on Training Plan to Launch Strikes on N Korea
Council on Foreign Relations US-Korea Policy Program Director Scott Snyder said that the best approach would be to prepare for additional provocations should they occur, rather than to predict them.

Last week, the UN Security Council unanimously passed a resolution to extend existing sanctions on Pyongyang in response to the country’s fourth nuclear bomb test in January and long-range rocket launches in breach of the existing Security Council resolutions.

"Thus far, sanctions have not succeeded by themselves. Additional measures will be required… [North Korean leader] Kim Jong Un seeks state security through nuclear development. But I am not sure that this strategy will ever make Kim Jong Un feel sufficiently secure," Snyder explained.

UNSC N Korea Nuclear Program Resolution to 'Go Beyond' Existing Resolutions
Despite limited industrial cooperation, South and North Korea are still legally at war as no peace treaty between them was signed after the Korean War of 1950-1953.

During last year's Seoul-Washington exercises, Pyongyang fired short-range ballistic and surface-to-air missiles as it believed the drills to be part of an invasion to the North.