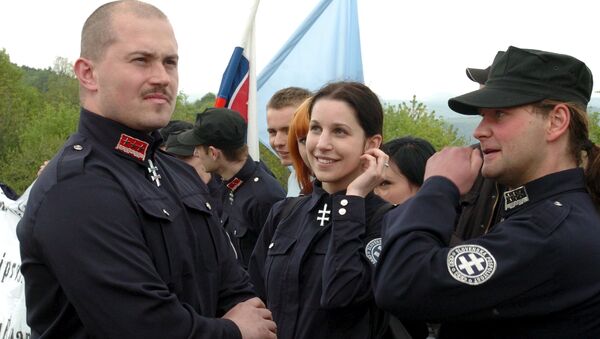 Amid feelings of hostility prompted by the recent migrant crisis, two neo-nationalist parties in Slovakia were able to take a combined total of 29 out of the 150 seats in the country's legislature, allowing them to constitute a formidable force within the Slovak Parliament.

Slovakia May Face Fractured Parliament After General Elections
“People’s Party – Our Slovakia” (shortened in Slovak as L’SNS), an allegedly neo-Nazi party which was established in 2011 and claims on its website to be the "only real alternative and opposition to the corrupted and criminal 'democratic' system," won seats in Slovak parliament for the first time, reports The Jerusalem Post.

L’SNS garnered 14 out of 150 seats in the National Council, the Slovak Parliament, three times more than expected.

Another far-right, nationalist party, Slovak National Party (SNS), led by the lawyer Andrej Danko, won 15 seats in the legislature; like the L'SNS, it is committed to national, Christian and social ideals, according to its website. Together, they control 29 seats, or nearly 20 percent of the legislature.

In comparison, the socialist "Direction-Social Democracy" Party of Prime Minister Robert Fico, which ran on an anti-migrant platform, took 28.3 percent of the vote, or 49 seats; previously it had held 83 seats in the legislature. The party will have to form a coalition in order to stay in power.

The L’SNS is led by Marian Kotleba, the former chairman of the banned neo-Nazi party “Slovak Togetherness – National Party.” Marian Kotleba is an outspoken opponent the United States, NATO, the European Union and immigration.

According to The New Observer, the ĽSNS is the great rising surprise of Slovak politics: a hardline nationalist party that was banned by the system under accusations of “neo-Nazism,” and which was refounded in 2011. It has ties with both Greece's Golden Dawn party and the Hungarian party Jobbik.

The L'SNS website states that the party "continues in the legacy of our national heroes – Ludovit Stur, Dr. Andrej Hlinka and Dr. Jozef Tiso." While Stur was the leader of the Slovak national revival in the 19th century and Hlinka was notable for his early support of Slovak independence, Tiso was an anti-Semitic Nazi collaborator who ruled Slovakia from 1939 until 1945. During that time, Slovakia offered to pay Berlin 500 Reichsmarks for each Jew it deported to Germany, on condition that they didn't return. They didn't: 83% of Slovakia's Jews died in the holocaust. According to the BBC, Kotleba once described Tiso's regime as "like living in heaven."

The polls indicate that ĽSNS took 23 percent of all first-time voters, indicating that the younger generation in Slovakia is increasingly turning toward nationalism.

The rise of these nationalist forces, who have until now been perceived as marginal groups, to actual politics, is an outstanding occurrence; its consequences are almost impossible to predict.