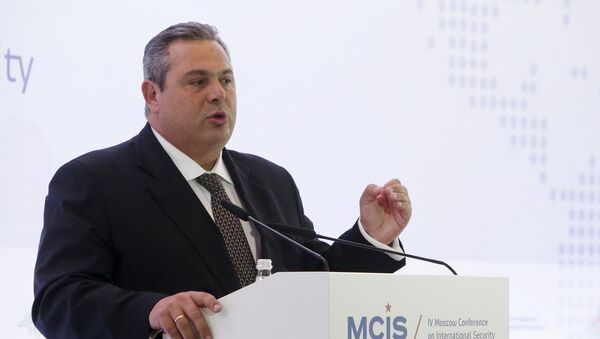 Greek Defense Minister Panos Kammenos in talks with NATO Secretary General Jens Stoltenberg urged the alliance to swiftly start a naval operation in the Aegean Sea along Greek islands to curb the refugee inflow into the bloc, the ministry said Monday in a statement.

NATO to Expand Activities to Territorial Waters of Greece, Turkey
ATHENS (Sputnik) – Panos Kammenos and the NATO head held talks in Brussels earlier in the day to discuss the Alliance’s activities in the Aegean Sea.

"The defense minister told the NATO secretary general about the need for an immediate start of the activities on the entire territory along the Greek islands, from Limnos to Kastellorizo and Gavdos and along the coast of the Anatolian peninsula. Greek positions were received," the statement reads.

On February 11, defense ministers of the 28 NATO member states decided to send the Alliance's naval ships to the Aegean Sea to monitor the flow of migrants between Turkey and Greece.

The EU states are currently struggling to deal with a refugee influx, with hundreds of thousands of people fleeing conflict-torn countries in the Middle East and North Africa. Frontex recorded more than 1.8 million illegal border crossings into the bloc in 2015. Greece is the main transit route for refugees coming across the Aegean Sea from Turkey.