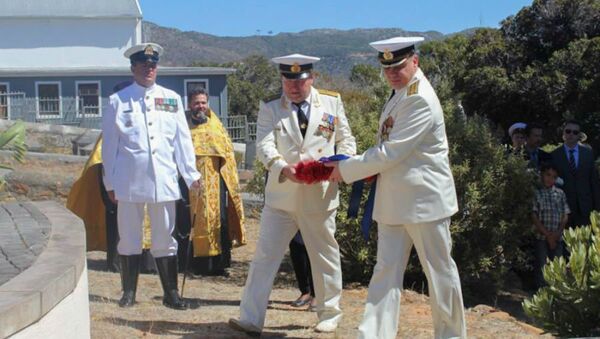 MOSCOW (Sputnik) – The crew of the Russian Navy’s oceanographic research ship, the Admiral Vladimirsky, laid flowers at the monument dedicated to the memory of Russian sailors in South Africa, the Navy spokesman said Sunday.

The Admiral Vladimirsky arrived from the shores of the Antarctic at the Cape Town port on March 3 to restock and continue along its route five days later.

"The crew of the oceanographic research vessel calling in at the port of Cape Town laid wreaths at the monument to Russian sailors who participated in the Russian Navy’s 1809-1865 campaigns and were buried on the Cape Peninsula in Simon’s Town," Сapt. 1st Rank Igor Dygalo said.

The Admiral Vladimirsky left Russia on November 6, 2015, in a hydrographic campaign that included a first visit to Antarctica in 30 years. It is expected to sail over 30,000 nautical miles in the course of its 2015-2016 expedition, and is due to return to Russia’s Kronstadt port near St. Petersburg in April.