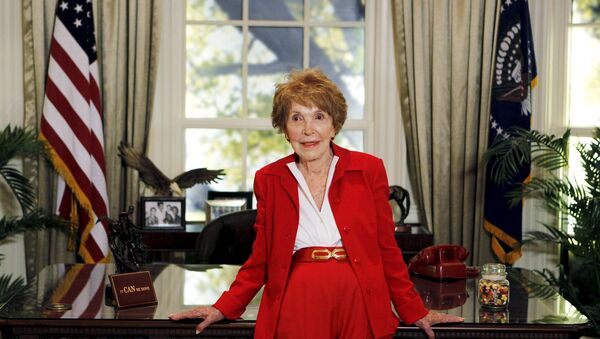 © REUTERS / Chris Carlson
Subscribe
Former US First Lady Nancy Reagan and wife of late former President Ronald Reagan died at her home in Los Angeles at the age of 94, according to an official statement.

Nancy Reagan, former first lady and widow of US President Ronald Reagan who was noted for her efforts to discourage drug use by American youths, died this morning in Los Angeles of "congestive failure," according to an official statement by the Reagan Library She was 94.

Secret Docs: Reagan Prepared for Soviet Nuclear Talks With Fiction Novel
Anne Frances “Nancy” Robbins was born on July 6, 1921, in New York City. Her parents separated shortly afterward, and she was sent to live with an aunt and uncle in Bethesda, Maryland. When Nancy was 6 years old, her actress mother married a surgeon, who adopted Nancy.

She went on to study drama at the prestigious Smith College in New England. After graduation, she eventually followed her mother’s career path and become a professional actress, performing on stage in New York and starring in films in Hollywood. In 1949, Nancy met Ronald Reagan, then the president of the Screen Actors Guild. The couple married three years later. Having already assumed custody of Maureen and Michael, Reagan’s children from his previous marriage to actress Jane Wyman, Nancy gave birth to daughter Patti and son Ron.

​In 1967, after her husband was elected governor of California, Nancy became the state's first lady. She quickly drew criticism for moving her family from the Governor's Mansion, which she called a "fire trap," to an exclusive suburb in Sacramento. Characterized as "snobbish," she defended the move over concern about her family's safety. Her reputation improved in time, and the Los Angeles Times named Nancy its "Woman of the Year" in 1968, calling her "a model first lady" for her style and youth.

​​During her husband's two terms as governor from 1967 to 1975, Nancy worked with numerous charitable groups. She used her public platform to assist Vietnam veterans and lead the Foster Grandparents program, which paired senior citizens with special-needs children.

Ronald Reagan decided against seeking a third term as governor of California and instead began his quest for the White House in 1976. After some initial reluctance, Nancy took on the traditional role of a candidate's wife, holding luncheons and talks in which she made remarks that reflected her husband's views on issues. Ronald Reagan ultimately lost his bid to be the Republican nominee to Gerald Ford, but came back to win the 1980 presidential election.

Nancy Reagan will be remembered for her deep passion for this nation and love for her husband, Ronald. The Reagan family is in our prayers.

​In 1982, as first lady of the United States, Nancy began to champion drug abuse awareness and education among American youths through her "Just Say No" campaign. She traveled throughout the United States and several foreign countries visiting drug prevention programs and rehabilitation centers. In 1985, she hosted an international conference on youth drug abuse at the White House. Her efforts culminated in the "National Crusade for a Drug Free America Act," signed into law by President Reagan in October 1986. Continuing her efforts, Nancy Reagan addressed the United Nations General Assembly in 1988, speaking in support of strengthening international drug interdiction and trafficking laws. In October 1987, while in the midst of her anti-drug campaign, Nancy was diagnosed with breast cancer and underwent a mastectomy.

​The Reagans left White House in 1989 and retired to California. Nancy published her autobiography “My Turn,” and launched the Nancy Reagan Foundation to support after-school drug prevention programs. Following Reagan’s 1994 announcement that he was suffering from Alzheimer’s disease, Nancy served as his caretaker until his death in June 2004. She became an outspoken public advocate for stem-cell research. Nancy was awarded many distinguished awards and honors, and continued to bring attention to her husband's legacy, traveling to Washington, DC in 2009 to unveil a statue of the late president in the Capitol rotunda.

That time Nancy Reagan went on Diff'rent Strokes in 1983 to tell kids to "just say no." pic.twitter.com/3yeIucc6lP

​Reagan will be buried at the Library next to her husband, who died in June 2004, the Library said.

000000
Popular comments
More secrets going to the grave. A far better First Lady than Hillary by parsecs.
karlof1
6 March 2016, 21:32 GMT
000000
Rest in peace, Mrs. Reagan. America and the world have gone so far downhill since those much better times.