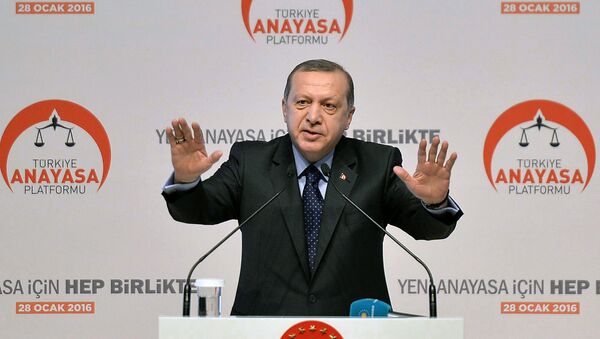 © AFP 2021 / ADEM ALTAN
Subscribe
Europe has allowed itself to become fatally dependent on the Turkish president, whose crackdown on opposition and the Kurdish minority could also have grave consequences for Europe, Green Party politician and Bundestag Vice-President Claudia Roth told Die Welt.

EU Should Refrain From Giving Money to Turkey to Cope With Migrant Crisis
The EU made a "highly problematic" agreement with Turkey in November to try and ease the migrant crisis, while Greece is on the verge of collapse without greater support from Brussels, German former Green Party leader and Bundestag Vice-President Claudia Roth told Die Welt on Sunday.

"I have huge concern for Greece. The country has been left in the lurch by European partners for months. The motto is, 'Bad luck, if the Mediterranean is right outside the door.'"

That Greece is in need of humanitarian aid from the EU, a source of funding usually reserved for developing countries, is an "indictment" for the EU, Roth said.

"Greece's debt crisis problems are far from over, and now the humanitarian crisis is coming as well. As long as Greece is not markedly relieved conflicts there will foment," she said, warning of a rise in support for right-wing extremist politics. 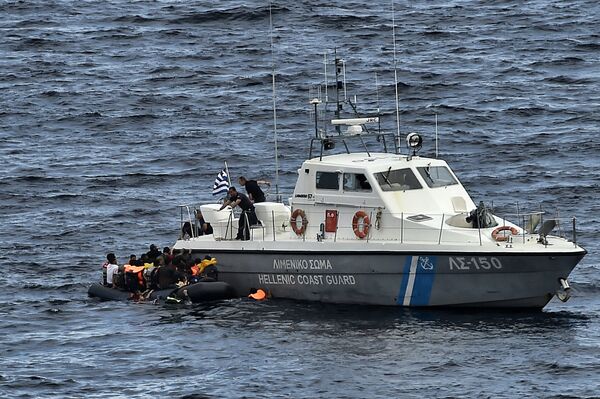 Hellenic coast guard personnel rescue refugees and migrants on a dinghy as they try to reach the Greek island of Lesbos while crossing the Aegean sea from Turkey on September 29, 2015
© AFP 2021 / ARIS MESSINIS

"The politics of austerity and the harsh attitude of the federal government towards Athens have certainly led to anti-German resentment in some European countries. Now Merkel with her refugee policy is feeling the resistance to the perceived policy of German domination," Roth told the newspaper.

The politician noted that though the EU has been miserly in its support to Greece, it is willing to strike a deal with Turkey to stop the flow of migrants and refugees at any price.

Roth said that while Turkey has taken in many refugees from Iraq and Syria, the conditions in most Turkish refugee camps are unacceptable. She called the deal agreed with Turkey in November that gives Ankara political concessions and 3 billion euros ($3.3 billion) in financial aid to be spent on refugees in Turkey "highly problematic."

"The EU has got itself into a fatal dependency on President Erdogan and is now in the hand of this autocrat. If foreign politics is made out of internal political interests then human rights and the rule of law are left behind. Because the EU wants to contain the refugee influx from Turkey at any price, it is not at all concerned any more about the rule of law in Turkey. The EU has been blackmailed."

'Claudia Roth: Europe has got itself into fatal dependency on ​Erdogan,' Die Welt reported its interview with the politician.

"He (Erdogan) is massively increasing the pressure on the opposition and minorities in the country, and is conducting a brutal war again the Kurds in the Southeast. In Diyarbakir, hundreds of people, including children, have been imprisoned and are being starved. There is no audible criticism from the EU."

Erdogan's campaign against the Kurds has consequences for Germany, and for the Syrian crisis, where his policy is escalating the conflict, Roth said.

Germany Doubts Whether Turkey Should Become Full EU Member
On Monday representatives of the EU and Turkey are holding a summit in Brussels, and the European politicians must address Erdogan's role in the Syrian conflict, his attacks on the Kurds and human rights in Turkey, Roth urged.

"When it comes to fighting the causes of the flight of refugees, Turkey is part of the problem. Erdogan is involved in escalating the Syrian conflict and his brutal crackdown on the Kurds causes more refugees to flee the Kurdish areas."

"I have concerns that the conflict with the Kurds will be carried over to Germany from Turkey. I can well remember the 1990s, when Kurdish women stood on the roads here and set themselves on fire. In Hannover, Berlin and Hamburg the old conflict between Kurds and Turks is sporadically emerging again. Therefore we must not turn a blind eye to what is happening in Turkey."

000000
Popular comments
She is damned right about Greece's dire needs and the refugee camp.. maybe Germans could replaced Merkel for her..

nshahhsh
6 March 2016, 22:23 GMT
000000
Once in a while I actually appreciate a Green politician. Roth is telling it like it is, on several levels at once. We Sputnikites mostly seem to get what an evil bastard Erdogan is, and what a crappy deal Brussels made with him. But I am getting quite excited by the Greek part of this horrible equation. For every appeasement of turkey, it's never long before the EU picks on Greece about something, new or old. Almost as if Merkel and Hollander WANT to drive Greece into the Russian fold. As the Greeks daily wonder what to do to survive, how is the Kremlin viewing the drama? Polite words in public, but how seriously is Russia taking this unfolding train wreck? What I'm asking now is, What is Russia exactly willing to do to help Greece? Have the Russian cabinet ministers even begun realistically planning for any scenarios that feature various levels of collapse of the Greek state?
wendigo
6 March 2016, 22:23 GMT1
000000
Newsfeed
0
New firstOld first
loader
LIVE
Заголовок открываемого материала
Access to the chat has been blocked for violating the rules . You will be able to participate again through:∞. If you do not agree with the blocking, please use the feedback form
The discussion is closed. You can participate in the discussion within 24 hours after the publication of the article.
To participate in the discussion
log in or register
loader
Chats
Заголовок открываемого материала
Worldwide
InternationalEnglishEnglishMundoEspañolSpanish
Europe
DeutschlandDeutschGermanFranceFrançaisFrenchΕλλάδαΕλληνικάGreekItaliaItalianoItalianČeská republikaČeštinaCzechPolskaPolskiPolishСрбиjаСрпскиSerbianLatvijaLatviešuLatvianLietuvaLietuviųLithuanianMoldovaMoldoveneascăMoldavianБеларусьБеларускiBelarusian
Transcaucasia
ԱրմենիաՀայերենArmenianАҧсныАҧсышәалаAbkhazХуссар ИрыстонИронауОssetianსაქართველოქართულიGeorgianAzərbaycanАzərbaycancaAzerbaijani
Middle East
Sputnik عربيArabicArabicTürkiyeTürkçeTurkishSputnik ایرانPersianPersianSputnik افغانستانDariDari
Central Asia
ҚазақстанҚазақ тіліKazakhКыргызстанКыргызчаKyrgyzOʻzbekistonЎзбекчаUzbekТоҷикистонТоҷикӣTajik
East & Southeast Asia
Việt NamTiếng ViệtVietnamese日本日本語Japanese中国中文Chinese
South America
BrasilPortuguêsPortuguese
NewsfeedBreaking
06:18 GMTPoll: 6 in 10 Americans Say Oil, Gas Companies Bear Brunt of Blame for Climate Change
06:14 GMT'Worst Prepared': Denmark's Solo Mission Against Piracy Off the Coast of Africa Meets Criticism
06:06 GMTLondon Court Holds Hearing on US Appeal of Assange Extradition Case
05:51 GMTUK Budget and Spending Review: Sunak May Announce Britain Preparing for 'New Economy Post-COVID'
05:09 GMT'Pyramid Scheme': Project for Women-Only Island in Finnish Archipelago Fails to Materialise
04:00 GMTBoJo's National Insurance Tax Rise May Hinder Post-COVID Recovery, Cause Unrest in UK, Scholars Warn
03:42 GMTChina May Have the Edge in the Final Frontier With Its 'Satellite-Crushing' Weapon
01:50 GMTCongress to Get Tough on Armed Services After 2,000 Military Firearms Stolen During the 2010s
01:21 GMTOld Habits: Big Tobacco's Annual Cigarette Sales Increase for First Time in 20 Years, FTC Reports
01:00 GMTBlinken Speaks to Sudan's Prime Minister, Welcomes His Release - State Dept.
YesterdayChina Pushes Vaccination Program Ahead as Lanzhou Placed in Lockdown to Contain New Covid Cases
YesterdayAre Manchester United and Antonio Conte a Good Fit?
YesterdayAngry Emojis Only!
YesterdayThe Spice Must Flow: ‘Dune’ Sequel Greenlit After Successful Opening Weekend at US Box Office
YesterdayRight-Wing Chilean Newspaper Sparks Outrage After Tribute Article to Hermann Göring
YesterdayUS Intelligence Unit Seeks Way to Detect Radio Signals That Indicate Data Breaches
YesterdayUS Senate Confirms Ex-Republican Senator to Be Next Ambassador to Turkey
YesterdayUnited Airlines Pilots, Workers Refusing to Fly With Unvaccinated Colleagues, Court Docs Reveal
YesterdayEx-Lehman Brothers Exec Predicts 3 More Years of Inflation, Tech Stocks to 'Get Crushed'
YesterdayBacking for Increased US Police Budgets Surges to 47% Amid Rise in Violent Crime – Poll