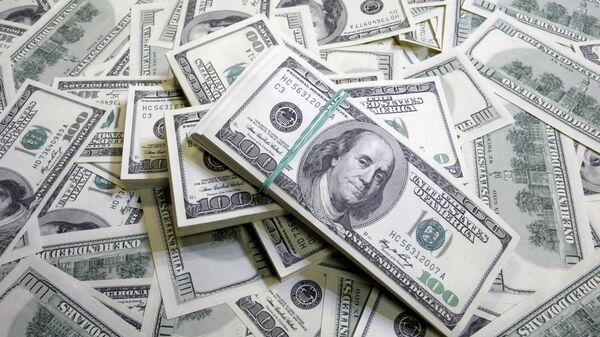 © Sputnik / Michail Kutuzov
/
Go to the mediabank
Subscribe
International
India
Africa
Tactical Investor
All materials
One of the reasons the US has engaged Russia is that it has made it a mission to wean itself from the dollar. Putin openly stated that Russia should sell its oil and gas in ruble. This does not sit well with the US for many other nations could follow in Russia’ footsteps as it is a dominant and powerful player in the energy sector.

More importantly, Russia is the only nation capable of taking on the US and not afraid of doing so. Putin has stated many times that he wants to price Russian resources in multiple currencies and avoid the dollar.

Russia
Against the Dollar? What Russia’s Increase of Bullion Reserves Could Mean
His contention is that the US creates money out of thin air and in doing so is defrauding the entire world and his point is valid.

1) The US is desperate and they are doing their best to portray power, but instead it is coming off as weakness. But a desperate animal is bound to do even more desperate thing;

2) Now that China and Russia have joined forces, they have become a lethal combination. China has the money and the economy and Russia has the guns and firepower.

Individually, it would be hard for them to take on the US, but combined they are now in a position to challenge the US and they are currently doing so.

How will things play out?

Russia has clearly indicated that they will no longer be pushed by the US and so has China. Unfortunately for the US, its stupid actions pushed China and Russia into each other’s arms and this makes them invincible. Hence, expect the number of bilateral deals conducted that bypass the dollar to increase at an exponential rate in the years to come.

The dollar will be dethroned and the masses will finally see the Emperor for what he really is; a naked fat bald old man, with a huge belly, no clothes, bad breath and one that has not taken a shower for months on end.

Dollar Selloff Halts as US Inflation Picks Up, Stirring Fed Hike Debate
The decline will not be as fast as the Gold bugs or hard money experts are opining about; the 1st stage will be slow and controlled but when the momentum builds up, the change of pace will be stunning.

Then end game won’t be pleasant, but don’t sit around waiting for that day, because you could be gone before it comes. Hence, focus on today for that is all your control. Yesterday is gone and tomorrow may never come.

There are many opportunities to latch onto while you wait for the demise of the dollar. For example, the Russian ruble makes for a great long term investment or you could buy two companies that look great Vimpel Communications (VIP) and Yandex (YNDX).

This story was prepared courtesy of www.tacticalinvestor.com