Mounting evidence appears to indicate that Turkey is providing extensive support to Daesh and al-Nusra Front, the two key terrorist organizations that have turned Syria into ruins and wreak chaos elsewhere.

Despite its tough anti-Daesh rhetoric, the Turkish leadership has done nothing to dismantle the existing terrorist network in the country. "After so many horrible terrorist acts, not a single real participant or mastermind has been arrested," the Turkish politician observed. 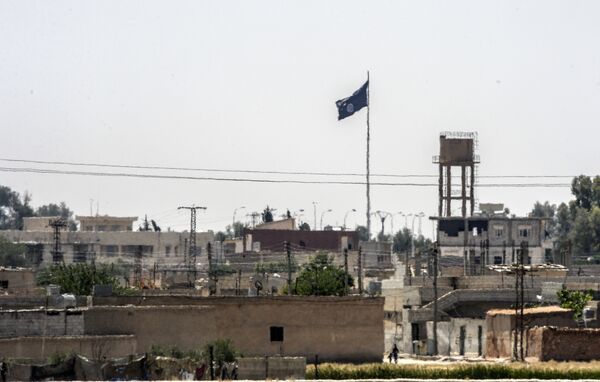 In a picture taken from Alcakale, Turkey, a flag of the Islamic State flutters amongst buildings in the center of the Syrian city Tal Abyad on June 13, 2015
© AFP 2022 / BULENT KILIC

Breaking Bad? Erdogan's 'Willful' Foreign Policy 'Bemuses' Turkey's Allies
Kürkçü also mentioned that some in the Turkish military and law enforcement agencies are in direct contact with the terrorist group. He was referring to a recent report, released by the Cumhuriyet newspaper.

The opposition daily published transcripts of several phone conversations between unnamed Turkish officers and a key Daesh operative in the region bordering Syria. The documents appear to show that Turkish officers not only frequently communicated, but worked with the militants.

It follows then that "at the moment Daesh receives support and recruits with the tacit approval of the Turkish government, as well as the country's president and prime minister," Kürkçü concluded.

Meanwhile, RT has published footage shot on the outskirts of the Syrian town of Azaz, which is controlled by al-Nusra Front militants. The Kurdish People's Protection Units (YPG) have been unable to liberate Azaz because Turkish forces shelled the area.

"We can actually see here the important border town of Azaz, that Turkey is determined to prevent YPG from taking. Just a little beyond that you can see the Bab al-Salam border crossing and a heavy flow of vehicles coming from Turkey into Azaz," the RT correspondent narrated.