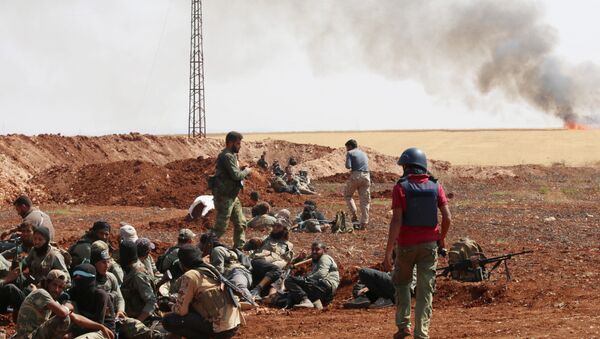 A ceasefire deal has been reached with the field commander of Syria’s militant group Jaysh al-Islam and five other opposition forces, the commander of the Russian center for Syrian reconciliation said Friday.

HMEYMIM (Sputnik) — A truce has also been agreed with five commanders of Syria’s moderate opposition forces, as well as the elders of two settlements in the Homs province, the statement read. Talks are underway with leaders of four other militant groups.

"In the past two days, agreements on the cessation of hostilities were reached with the field commander of Jaysh al-Islam, which controls the town of Ruheiba, as part of the efforts made by the Russian reconciliation center," Lt. Gen. Sergei Kuralenko said in a statement.

"Yesterday, I sent a letter to UN Special Envoy for Syria Staffan de Mistura with a request to allocate humanitarian aid to the population of 21 settlements in the Damascus, Homs, and Daraa provinces, which have joined the peace process and have been damaged by terrorist shelling," Lt. Gen. Sergei Kuralenko said.