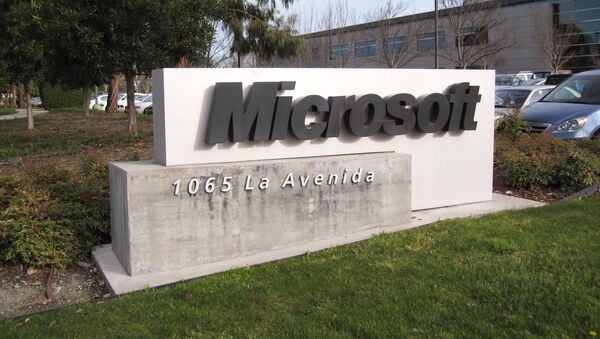 And there it is: Microsoft, Amazon, Google, Facebook among the latest giants to file court papers supporting Apple. pic.twitter.com/8ESx2D5eGU

"As storing sensitive personal and commercial data electronically becomes less of a luxury and more of a necessity, protecting that data has also become a necessity," attorneys for Microsoft and Google wrote.

"The [US] government's bid to have technology companies undermine their own security measures is all the more puzzling because the Executive has been encouraging companies to increase cybersecurity in consumer products."

The US Justice Department is attempting to force Apple to hack into the phone, belonging to the San Bernardino shooter Syed Farook. But for Apple to successfully get into the device, the company would have to develop new software.

The cell phone that belonged to Farook, who shot dead 14 people in an "act of terrorism", ran with the iOS9 operating system which was developed by Apple without a "backdoor" to its encrypted data. In order for the tech giant to hack into the cell phone — it would have to develop hacking software capable of breaking its own encryption.

"Once created, the technique could be used over and over again, on any number of devices…The [US] government is asking Apple to hack our own users and undermine decades of security advancement," Apple's CEO Tim Cook said.

Another cohort of tech companies has waded into the row over the Apple iPhone, which goes to the core of the current argument over personal privacy and government surveillance techniques.

Airbnb, eBay, GitHub, Kickstarter, LinkedIN, Medium, Reddit and Twitter have also filed a joint brief warning that if the FBI win the case, "the assistance it can request is limited only by its imagination" and judges' opinions, as well as constituting "classic compelled speech."

Missing from the list of Silicon Valley tech giants who filed a joint court brief in support of Apple is Amazon. The company had been expected to join the other tech giants in backing Apple's stance — but hasn't. In fact, Amazon made the decision to drop its encryption support on its Fire tablets.

Un-encrypted devices mean that any hacker or attacker can access all data, including logins, credit card details, photographs, videos, texts and emails.

The decision to remove the encryption service from its Fire OS 5 was made at the end of 2015. A spokesperson for Amazon told The Verge: "When we released Fire OS 5, we removed some enterprise features that we found customers weren't using."

000000
Popular comments
This case is going to set an interesting precedent, which I think, Microsoft, Google, Cisco, etc., have all realised by now. If Apple lose, they will be next in line.