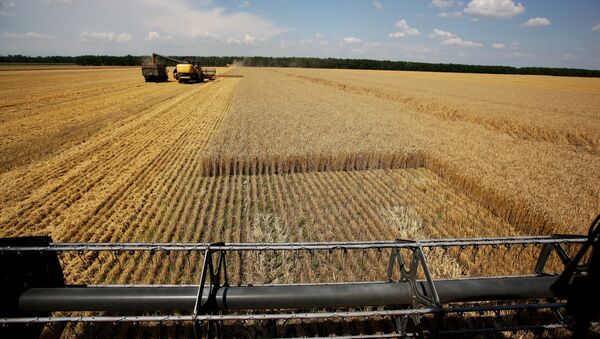 © Sputnik / Vitaliy Timkiv
/
Go to the photo bank
Subscribe
Russia could become one of the world's largest organic food producers, investigative journalist Seth Ferris notes, adding that contrary to the West's expectations Moscow used anti-Russian sanctions to its own advantage.

Russian National Security Strategy for 2016: Key Updated Points
While the Western political establishment has lulled itself into a false belief that the US-championed sanctions policy has left the Russian economy in tatters, a window of opportunity has opened for the country.

Believe it or not, Russia has a unique opportunity to beat the West at its own game. And it's not about gas supplies or oil extraction — it's about food production.

The country's arable land amounts to 2,168,400 square kilometers; however, the crux of the matter is that Russia's agricultural workers largely avoided sowing genetically modified crops or exhausting the soil by using herbicides. That means Russia's arable lands are perfectly suited for natural food production.

It is remarkable that the significant portion of Vladimir Putin's annual address to the Russian Duma was devoted to agricultural reform, aimed at bolstering the sector, Seth Ferris, investigative journalist and political scientist, notes in his analysis for New Eastern Outlook.

"On the surface, the agriculture reform seems merely logical. This is exactly why commentators have been searching so hard for hidden meaning. Russia never adopted the mass-production methods of Western agriculture… It therefore has vast swathes of land which could be used productively but are currently idle. It makes a lot of sense for Russia to want to put this land to use, and if it is going to spend state money on such a program it is obviously going to try and get the highest return it can," Ferris narrates.

Russia Able to Become Biggest World Supplier of Ecologically Clean Food
He calls attention to the fact that the Russian leader is offering that the country should not only grow its own food but to produce food of high value — not genetically modified (GMOs) and not artificially enhanced.

Indeed, in one of his recent articles for the same media outlet American researcher and author F. William Engdahl praised Russia for banning genetically modified products on its territory as well as GMO imports from the US.

"Russia is making consequent its decision last fall to ban the commercial planting of Genetically Modified Organisms or GMO in its agriculture acreage. The latest decision, effective February 15, 2016 does not at all please Monsanto or the US Grain Cartel," Engdahl wrote, adding that the Kremlin policy is dealing a heavy blow to Western GMO cartels.

According to Ferris, there are a number of political factors lying beneath Vladimir Putin's proposed agricultural reforms, which obviously include the West's sanctions policy against Moscow.

"If these reforms are successful, Russia will indeed become a major organic food producer, and this will have considerable political consequences the West will not like," Ferris notes.

Gates Foundation Pushes GMOs Under a Mask of Feeding Starving Africans
Indeed, according to the EU Parliament report, since the collapse of the USSR Russia has been regarded by Europe as "the second most important destination" for EU agricultural products.

Given the fact that Russia possesses vast arable lands and has practical experience in livestock farming, it seems surprising that for years the country has imported a wide variety of agricultural products from abroad instead of boosting its own agricultural sector.

"The West is very fond of proclaiming principles and then completely ignoring them. When it does, Russia takes advantage. It imposed sanctions on Russia whilst ignoring them elsewhere, so Russia has to grow its own food and the West will want to pay for it," Ferris remarks.

"If it can get its land working, Russia will give the people of developing countries as well as trendy Westerners what they want," the investigative journalist emphasizes.

000000
Popular comments
Great for Russia. That is what sanctions do for you. Keep up the good work. Death to Monsanto before they kill us. Putin is number 1