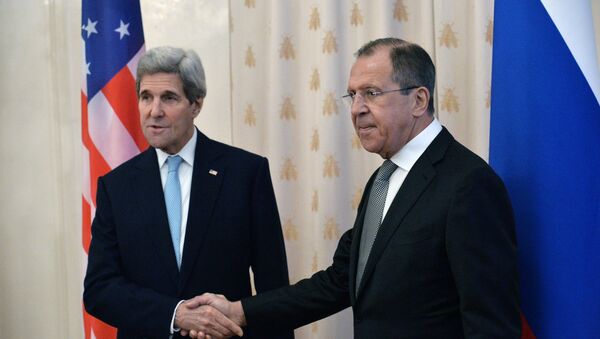 © Sputnik / Ramil Sitdikov
/
Go to the photo bank
Subscribe
Russian Foreign Minister Sergei Lavrov and US State Secretary John Kerry discussed the Syrian crisis in a phone call on Wednesday and urged to quickly resume the talks between Damascus and a wide range of Syrian opposition groups in Geneva, the Russian Foreign Ministry said.

Lavrov, Kerry Exchange Views on Syrian Ceasefire Implementation
MOSCOW (Sputnik) — According to the statement, Lavrov and Kerry reaffirmed the course on close military coordination between Moscow and Washington in the context of support of the Syrian ceasefire regime, which has been approved by the Russian and US presidents.

Last week, Russia and the United States reached an agreement on the ceasefire in Syria. The cessation of hostilities took effect at midnight on Saturday, Damascus time, generally holding across the country despite reported minor violations.

"The sides called for a quick resumption of talks between the Syrian government and the entire spectrum of opposition under the UN aegis in Geneva, where the Syrians must decide on the future of their country," the ministry said in a statement.