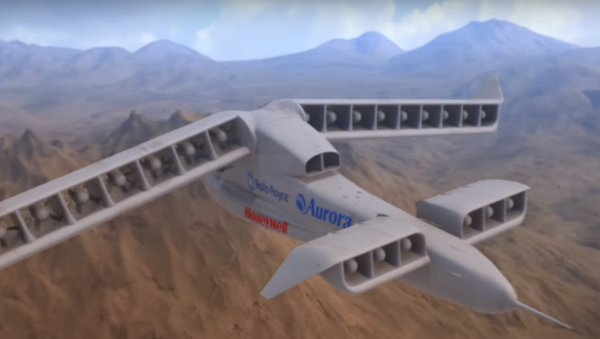 The US Defense Department has awarded a multimillion contract to develop DARPA’s new, state-of-the-art vertical take-off and landing (VTOL) plane – that it never intends to use.

The Boeing V-22 Osprey was developed in 1988 to provide the US military with a VTOL aircraft. It flies like a plane, but has the flexible landing advantages of a helicopter.

Still, the Osprey relies on two large open rotors which, while operating on relatively little power, are only 60 percent efficient. The Osprey’s fairly clunky design also gives the aircraft a poor lift-to-drag ratio. Aeronautical engineers point out that a more aerodynamic vehicle would be able to get off the ground with much less energy.

To create a more effective, next-generation VTOL aircraft, the Pentagon is in pursuit of an experimental X-Plane. DARPA has awarded an $89.4 million contract to Aurora Flight Sciences to pursue its 'LightningStrike' design.

"Aurora is proud to support DARPA on what we all hope to be a truly historic breakthrough in aviation technology," said R. John Langford, chairman and CEO of Aurora, in a company statement.

Rather than using two large rotors, the LightningStrike design relies on a series of 24 smaller, ducted fans positioned along the craft’s wings and tail.

The X-Plane is projected to be capable of flying at speeds of 300 knots, and carry approximately 4,000 pounds. Most importantly, the aircraft is designed to increase hover efficiency from 60% to 75%.

Despite the high price tag, the Pentagon does not intend to place the X-Plane into service. The original agency announcement stated that the plane is "not intended to create a pre-production type aircraft for any specific operational effort," but is instead meant to act as a testbed to research vertical lift technology improvements.

Interpreters of Pentagon announcements offer that the meaning of the phrase "not intended" could be that, if they are indeed in search of a replacement for the nearly 30-year-old Osprey, this initial $89 million investment is only a tiny fraction of the ultimate cost.

Still, Aurora intends to build a working prototype of the X-Plane to test the technology.

"[Phase II] will focus on the detailed design, development, fabrication, and testing of the subsystem technologies for integration on the aircraft," the announcement reads, according to Defense One. "Fabrication of the two air vehicles will also commence during this phase with the first aircraft completed prior to Phase III."