US Does Not Recognize Europe's Role in Fight Against Daesh 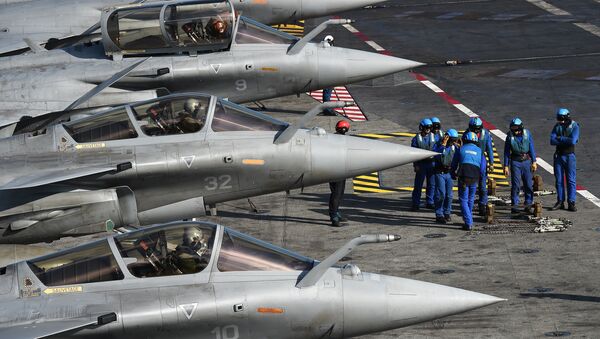 © AFP 2023 / ANNE-CHRISTINE POUJOULAT
Subscribe
International
India
Africa
According to a Sputnik.Polls survey, 80 percent of Americans believe that the US is the main force fighting against Daesh in Syria.

US, Europe Residents Support Russian Counter-Terrorism Campaign in Syria
WASHINGTON, Sputnik Press-Office ‒ Of those respondents who acknowledge the contribution Europe is making to the struggle, Germany's role was recognized by just 8 percent, Russia's by 25 percent, the UK's by 29 percent while 36 percent noted France's effort. The survey was conducted in the US by the Populus research company for Sputnik news agency and radio.

In Germany, 36 and 38 percent of respondents believe that Russia and the US, respectively, are playing the same leading role in the fight against such terrorist groups as Daesh and Jabhat al-Nusra in Syria. France ranks third on 25 percent. 24 percent of respondents named the Syrian government's army and the Kurds among the forces fighting terrorists.

The French believe that the US (32 percent), France (29 percent) and Russia (23 percent) are leading the fight. Only 2 percent of the French public thinks that Turkey is playing a significant role in combating terrorism in Syria. While 59 percent of British respondents identified the US as the main force in the fight, followed by 52 percent who pointed to the UK, 39 percent to France and 37 percent to Russia.

Daesh is a terrorist organization whose activities are banned in many countries, including Russia.

The international public opinion project was inaugurated in January 2015, in partnership with Populus, Forsa and Ifop France's oldest polling institute. The project organizes regular surveys in the United States and Europe on the most sensitive social and political issues.