Dreadful Premonition: Is ‘US Plan B on Syria a WWIII'? 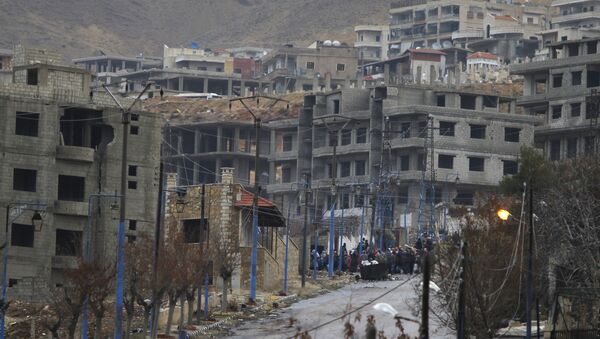 © REUTERS / Omar Sanadiki
Subscribe
The UN has delayed the start of the Syria peace talks by two days. Negotiations between the Syrian government and the opposition will start on March 9.

Syria Truce Shows Conflict to Be 'Resolved in Assad's Favor'
The UN special envoy to Syria said the move is needed to allow the cessation of hostilities to take hold and ensure that the sides won’t turn their meeting into discussion of truce violations.

Earlier, UN head Ban Ki-moon said that the Syrian ceasefire is holding by and large, despite some sporadic fighting and reciprocal accusations of truce breaches.

Under the Russia-US sponsored deal all parties to the conflict halt hostilities for one week. However the agreement does not include terrorist organizations, such Daesh and al-Nusra Front.

Gilbert Doctorow, Founder and the European director of the American Committee on East West Accord, spoke to Sputnik in an exclusive interview saying that UN’s decision to postpone peace talks is a reasonable move.

“The diplomatic process done largely behind closed doors where it has always been done successfully rather than with bull horns across the public arena to score points or to sabotage what has been achieved. What we heard today was a return to diplomacy as it was always practiced.”

Doctorow further spoke about how today there is mostly propaganda, war of words and ‘instrumentalized’ news announcements to destroy any peace process.

“The US and Russia agreed that violations or alleged violations of the ceasefire will be discussed by them quietly and not in the glare of the media.” Talking about what will happen in two days according to the analyst, “We have to see, we have to wait for them to tell us what it is that has hampered the timely start to the conference which as we know should have been on the 7 February.”

Assad Says Western Embargo Provokes Humanitarian Crisis in Syria
Speaking about Plan B and what it means exactly, Doctorow said that according to him, “The backup plan is World War III. This Plan B has been substantially discussed in Russian media far more comprehensively than in the West. I mean in the Russian talk shows, where people discuss these political issues and understand what it means.”

The analyst further stressed the importance of the ceasefire and how there should be no speculation about Plan B because according to the analyst this draws people back from stark reality.

He further spoke about how the US public, including the media, has largely been misled and allowed to fall into delusion.

000000
Popular comments
Well whatever 2016 or 2020 , the WWIII is just a matter of time.. the us (because it will be them who will start it) will need the good excuse before launching their missiles.