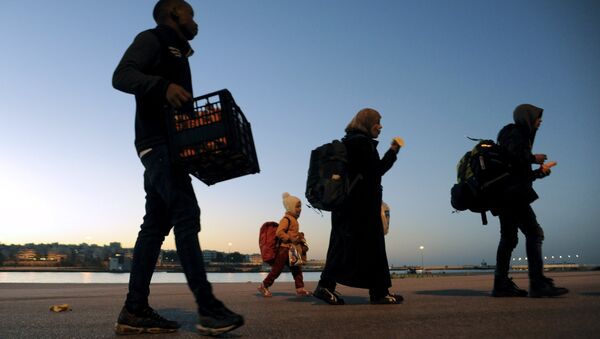 © REUTERS / Michalis Karagiannis
Subscribe
Greece is in the process of returning over 300 irregular migrants to Turkey in accordance with the EU-Turkey joint action plan to stem uncontrolled migrant flows to Europe, the European Commission said in a statement Wednesday.

Finger Pointing: EU Makes Greece 'Scapegoat' Over Refugee Crisis
MOSCOW (Sputnik) — In November 2015, the European Union and Turkey approved a joint plan to counter excessive migration into the bloc, under which EU member states will give some $3.3 billion to Ankara and fast track negotiations for its accession to the bloc. In turn, Turkey is to help protect EU borders from illegal crossings, and is expected to agree to resettle refugees that have managed to get to Europe from Turkey.

"The Commission is today able to confirm that Greece is in the process of returning 308 irregular migrants to Turkey. The European Union is stepping up its efforts to ensure those who do not qualify for international protection in Europe will be quickly and effectively returned to their countries of origin or transit," the statement reads.

According to the EU Commissioner for Migration, Home Affairs and Citizenship Dimitris Avramopoulos, the Commission has reinforced its support for cooperation on the return of irregular migrants between EU Member States and Turkey and today's transfers from Greece to Turkey show that "our efforts are starting to bear fruit."

"We have to make sure that those who are in need of protection will receive it, but it has to be clear as well that those who have no right to stay in the EU will be quickly and effectively returned," the commissioner noted.

Europe has been beset by a massive refugee crisis, with hundreds of thousands of undocumented migrants fleeing their home countries to escape violence and poverty. Many of them take the West Balkan route, which crosses Greece, using the county as an entry point into the bloc from which they travel onward to wealthier EU states where they intend to apply for asylum.

000000
Popular comments
I wonder how many "irregulars" there are still in Calais? I say that the first ones you see taking a dump or pissing in public places, should be on that list. After that, look for those who grab unwanted children to make their case for a visa entry. After that, let's go after the out and out criminal element. Then there are those who will refuse to assimilate. We have more than our share of those since the days of the Civil War, here in America. Give them a bag of fruit and vegetables, that just happen to be lying around since Russia's counter sanctions, and kick them the hell out!
marcanhalt
2 March 2016, 18:55 GMT
000000
This is a lie. Greece is being invaded by hundreds of thousands of angry, militant men of unknown origin in a blizkrieg type of assault. The leftist ZO Government says it will keep all these people in Greece with full rights, while the NGOs, funded from the EU and Soros keep up the propaganda. Meanwhile, the country is bankrupt and people are desperate. Things are moving fast, and soon we might see massacres against the Greeks. I will keep you posted.
Athanasios
2 March 2016, 23:09 GMT1
000000
Newsfeed
0
New firstOld first
loader
LIVE
Заголовок открываемого материала
Access to the chat has been blocked for violating the rules . You will be able to participate again through:∞. If you do not agree with the blocking, please use the feedback form
The discussion is closed. You can participate in the discussion within 24 hours after the publication of the article.
To participate in the discussion
log in or register
loader
Chats
Заголовок открываемого материала
Worldwide
InternationalEnglishEnglishMundoEspañolSpanish
Europe
DeutschlandDeutschGermanFranceFrançaisFrenchΕλλάδαΕλληνικάGreekItaliaItalianoItalianČeská republikaČeštinaCzechPolskaPolskiPolishСрбиjаСрпскиSerbianLatvijaLatviešuLatvianLietuvaLietuviųLithuanianMoldovaMoldoveneascăMoldavianБеларусьБеларускiBelarusian
Transcaucasia
ԱրմենիաՀայերենArmenianАҧсныАҧсышәалаAbkhazХуссар ИрыстонИронауОssetianსაქართველოქართულიGeorgianAzərbaycanАzərbaycancaAzerbaijani
Middle East
Sputnik عربيArabicArabicTürkiyeTürkçeTurkishSputnik ایرانPersianPersianSputnik افغانستانDariDari
Central Asia
ҚазақстанҚазақ тіліKazakhКыргызстанКыргызчаKyrgyzOʻzbekistonЎзбекчаUzbekТоҷикистонТоҷикӣTajik
East & Southeast Asia
Việt NamTiếng ViệtVietnamese日本日本語Japanese中国中文Chinese
South America
BrasilPortuguêsPortuguese
NewsfeedBreaking
19:46 GMTIran Prepares for Nationwide Air Drills After Israel Ok’s Special Strike Budget
19:41 GMTSyria's at-Tanf Base Hosting US Troops Comes Under Drone Attack, Reports Suggest
19:37 GMTNew York City’s Largest Police Union Sues Over New COVID Vaccine Mandate
19:35 GMTHeightened Inflation, Wages Impact Felt by Most US Businesses, Fed Beige Book Report Says
19:23 GMTBrian Laundrie Search: Coroner Called After Items Belonging to Laundrie Were Found
19:05 GMTFacebook Admits It Doesn't Ban Info Facilitating Illegal Immigration, Smuggling
18:58 GMTPoll: Support for Capitol Riot Probe Declines Among Republicans, Independents
18:55 GMTUS House Rules Committee Approves Bannon's Criminal Contempt Referral, Sets Up Full Vote
18:52 GMTUS House Lawmakers Introduce Bill to Make Human Rights 'Integral Part’ of Arms Sales
18:48 GMTREC: EXIAR Stands Ready to Support Armenia's Infrastructure Projects
18:40 GMT'Who the Hell Shrunk Mike and Why?' Twitter Explodes Over Pompeo's Dramatic Weight Loss
18:30 GMTUkraine NATO Membership: Why US, EU Won't Test Russia's 'Red Lines' Despite Pentagon Chief's Bravado
18:20 GMTREC's Support for Exports to Armenia Amounts to $72 Million Since Early 2021
18:18 GMT'Conspiracy to Malign' Image: India Rejects EU's Claim of Exporting Genetically Modified Rice
18:18 GMTRussian Agency for Export Credit and Investment Insurance Celebrates 10th Anniversary
17:56 GMTNo Offence, Christopher: Vikings Reached New World Long Before Columbus, New Study Claims
17:51 GMTUS Actively Upgrading Tactical Nuclear Arsenal, Russian Defence Minister Says
17:24 GMTResentment Swells in Strategic Ladakh as Modi Gov't Fails to Provide Jobs, Quota to Border Villagers
17:16 GMTUK Health Secretary Javid Hints at New Mask Rule, Warns Daily COVID-19 Cases Could Hit 100K
17:06 GMTOfficer, That’s Not Meowine! Russian Police Detain Cat Attempting to Smuggle Drugs Into Prison